A new paper published by the Economic Policy Institute argues that U.S. colleges and universities produce a relatively strong supply of qualified students in science, technology, engineering, and mathematics fields, despite some concerns to the contrary.

The authors also find little evidence to support the need to expand the number of high-skill guestworker programs, as Congress weighs that issue as part of a far-reaching debate on immigration policy. High-skill guestworkers make up a “large and increasing portion” of the labor market in information technology, and increasing the flow of those guestworkers runs the risk of depressing wages among the domestic workforce, the authors contend.

The analysis expounds on similar themes explored previously by Salzman and Lowell, who have argued that the fears of a leaky “STEM” pipeline are overblown and that the flow of qualified students through the K-12 and college systems is, in fact, strong, with some exceptions.

In the new paper, one of the authors’ takeaways is that the size of the actual STEM labor pool in the United States is small—just 4.4 percent of the market—despite the overriding attention paid to that field by policymakers.

What’s more, those workers are drawn from a relatively tiny slice of the population who obtain high school and college degrees. So focusing on the performance of the overall U.S. population in this area, as many do, is misleading, they say, when in fact it’s the “characteristics and performance of a very small group that is most relevant,” to filling STEM-focused jobs.

The authors use the figure below to frame that argument: 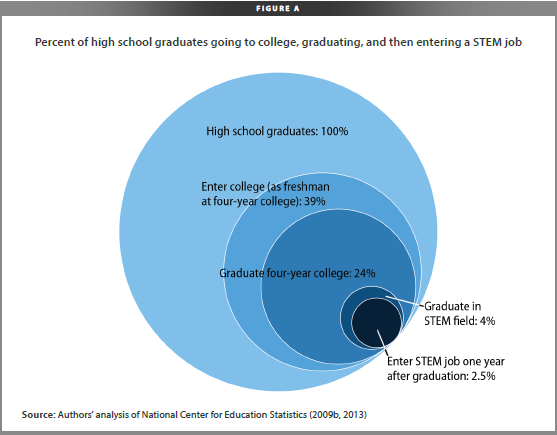