There were 48 mergers and acquisitions of education-focused technology companies in 2012, a slight dip from the previous year but still evidence of those businesses’ conviction that they can strengthen their position in the market through strategic growth, a recent report says.

The number of mergers and acquisitions worldwide fell from 51 the previous year, according to CB Insights, a New York City-based company that tracks and analyzes market research and data.

Those figures represent not just tech companies serving K-12 systems, but also those doing business with colleges, as well as those involved in professional training programs, said Anand Sanwal, the chief executive officer and co-founder of CB Insights.

Overall, the number of deals in education was dwarfed by those taking place in other areas of technology, including web/mobile commerce; advertising, sales and marketing; online news and information; and telecom, according to the report (see the highlights below).

In total, 2,277 private technology companies were acquired worldwide, in deals worth $46.8 billion. Within the United States, the majority of the deals took place in California, which hosted the acquisitions of more private tech companies than the next five states, combined, CB Insights reported.

The mergers and acquisitions in ed-tech involve both major companies and those in the early stages of their development, Sanwal told Education Week. The relatively large number of deals lends evidence to the idea that ed tech “is one of the hottest spaces” in the eyes of investors, he said.

Many ed-tech companies, Sanwal added, were most likely trying to build on their strengths by making new deals that would allow them to acquire not only products but also talented people who could help their businesses produce innovations going forward.

The findings seem consistent with other recent analyses of activity in the ed-tech market. See my colleague Mike Bock’s story last month in Education Week on deals in the overall education industry, and in digital learning, in 2012, which fell off a bit from the previous year. 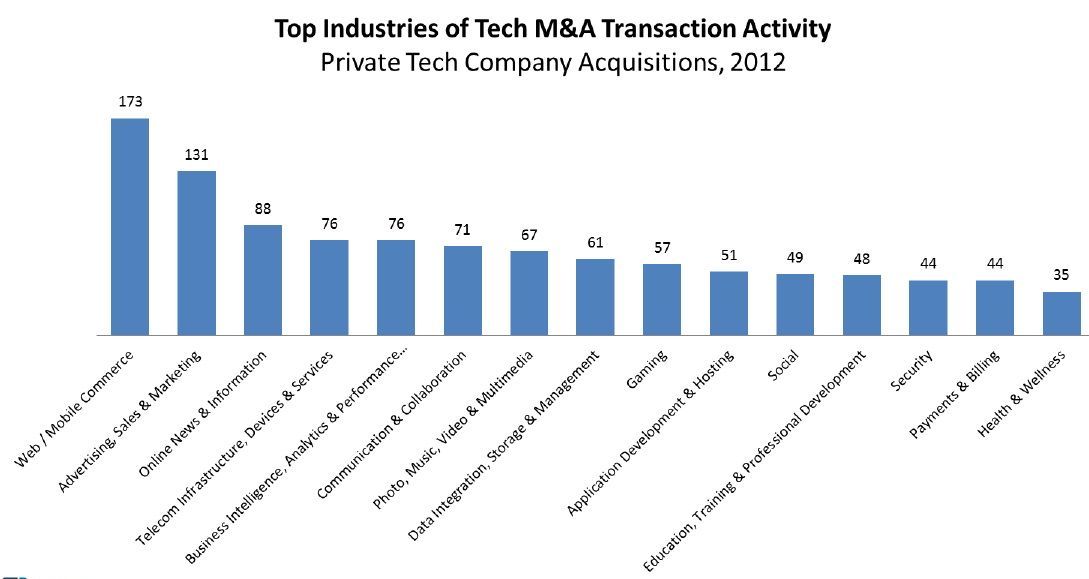 One thought on “Ed-Tech Companies Use Mergers, Acquisitions to Grow in 2012”