Renaissance, a major provider of classroom products across K-12, has ventured into the world of higher education to fill its chief executive officer position.

The Wisconsin-based company announced Monday that Daniel Hamburger will serve as its next CEO. Hamburger had most recently held the titles of president, CEO, and director of the DeVry Education Group, a for-profit higher education provider, from 2006 to 2016.  (DeVry was later rebranded Adtalem Global Education.)

Hamburger’s “passion for education, his extensive leadership experience, and his track record of growth made him the ideal fit,” said Tarim Wasim, the board chairman of Renaissance in a statement. 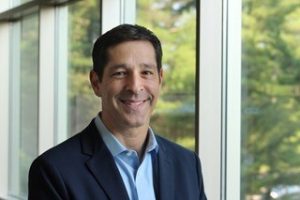 “At his previous companies, he earned a reputation for building strong cultures based on core values, accelerating innovation, and enhancing the student experience, all of which are essential at Renaissance.”

Before joining DeVry Education, Hamburger led Indeliq, a software-as-a-service-based education division of Accenture. Prior to that, he served as president for internet commerce at W.W. Grainger.

Hamburger, in a statement, praised Renaissance as a company with a “rich history, an incredibly mission-driven team and an innovative portfolio of solutions that enable educators and students to succeed.”

Three years ago, Renaissance was acquired by the private equity firm Hellman & Friedman for $1.1 billion, in what was then one of the largest deals in the history of ed-tech. The company offers a variety of products focused on assessment and learning tools in reading, math, and other subjects. Its offerings include STAR assessments, short tests that provide educators with learning data. (The company’s legal name is Renaissance Learning.)

Before Hamburger left DeVry Education, the company’s practices had come under scrutiny by the Federal Trade Commission, which in January of 2016 filed a lawsuit against the corporation. The agency alleged that the company’s ads deceived consumers about the likelihood that students would find jobs in their fields of study and would earn more than those receiving bachelor’s degrees from other universities.

The agency later reached a settlement with DeVry for $100 million, in which the company agreed to make cash payments to students who the FTC claimed were harmed by deceptive ads put forward by the company, and issue debt forgiveness.

DeVry Education continued to deny the FTC’s claims through the time of the agreement, saying at the time that “student services and access to federal student loans are not impacted by the settlement, and at no time has the academic quality of a DeVry University education been questioned.”

Renaissance had previously been led by John “Jack” Lynch, who left the CEO post earlier this year to take the leadership position at Houghton Mifflin Harcourt, a publisher and provider of content in K-12 and other areas.

Mike Evans, who had served as Renaissance’s interim CEO for the past six months during the company’s search, will continue as chief financial officer.

Photo of Hamburger provided by Renaissance.