Robotics used in education will continue to be in high demand internationally, driven in part by schools’ continued emphasis on STEM, STEAM, and the maker movement, according to a new report.

The $1.3 billion international robotics education market is set to grow to $3.1 billion by 2025, according to findings by market research firm HolonIQ.

The report, “Robotics in Global Education,” predicts that the strong growth the sector has had over the past 10 years will continue over the next decade. The incorporation of artificial intelligence technologies into the field will continue to change the nature of what “robotics” encompasses.

For the purposes of the report, HolonIQ defined the educational robotics sector as mechanical, electrical and either intelligent or programmable. The field is expected to continue to grow in STEM and coding areas, but also provide applications in language learning and special education.

Some robots are adopting more human-like characteristics—for example, Pepper from SoftBank Robotics, a humanoid robot that recognizes faces and basic emotions—but many are more construction or play-based, the report notes. The rise of smart devices is blurring the line “between what is a robot and what is simply a programmable device.”

“We need to be mindful that it’s completely plausible that over the next 10 years we’ll see AI and the internet of things-based interaction in the classroom that might take the place of a physical form,” said Patrick Brothers, co-founder and managing director of HolonIQ.

The maker movement is also spurring growth in the market. “There’s a return to the constructivist appetite for learning by getting back into play,” Brothers said. “We’ve been through this wave of kids with tablets and we can see this demand for more play-based learning.”

Market leaders like LEGO continue to expand and innovate and companies not traditionally operating in the education marketplace are making moves in that direction, Brothers said. For example DJI—a Chinese drone manufacturer–and Texas Instruments both recently pushed into the educational space with robotics offerings.

As AI-powered robots become more prevalent, this technology will likely be used in teaching language skills and for personalization and social-emotional learning. The report notes emerging applications in special education as well. 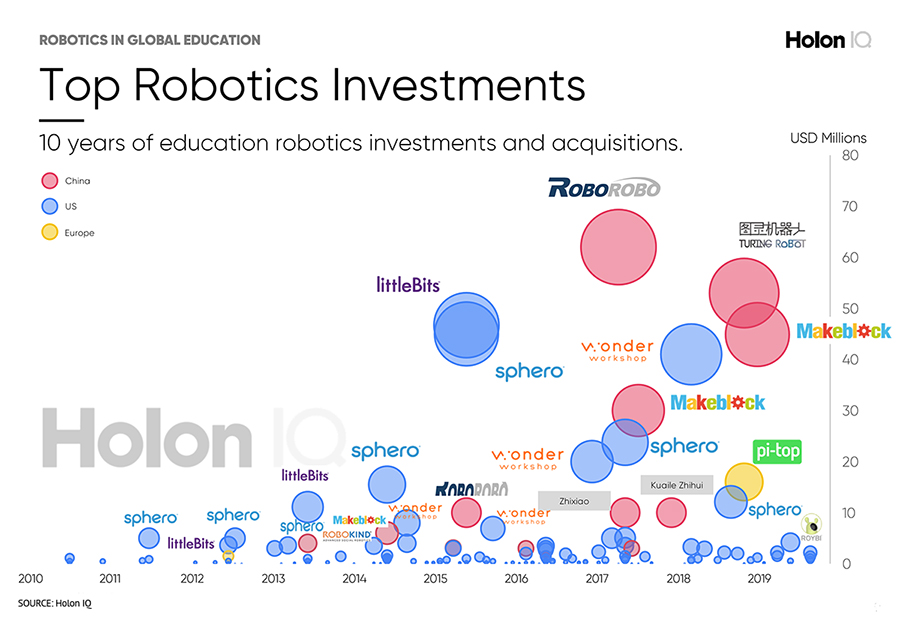