Robert L. Hughes, who leads an organization focused on school improvement in New York City, has been named the new director of K-12 strategy for the Bill & Melinda Gates Foundation, a major force in the world of education policy through its targeted philanthropic gifts.

Hughes currently serves as president of New Visions for Public Schools, a nonprofit that works with schools in the nation’s largest school district. The organization’s strategies have touched a variety of areas, including teacher preparation, the launching of charter schools, helping teachers implement the common-core standards, and improving instruction through efforts that span curriculum, scheduling, and other factors. 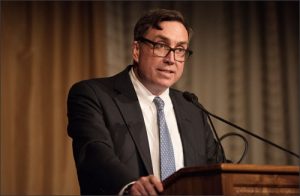 As president of the organization, Hughes has shepherded the establishment of 99 district and six charter schools in New York City, according to the Gates foundation.

While at New Visions for Public Schools, the organization noted that Hughes led the New Century High School Initiative, which partnered with the United Federation of Teachers, the Council of School Supervisors and Administrators, the New York State Department of Education, and community partners to design and launch about 100 small high schools in impoverished neighborhoods in the city.

Hughes is also known in New York for serving as co-counsel for the Campaign for Fiscal Equity, a lawsuit that challenged the constitutionality of the state’s school-finance system.

(The Gates foundation provides financial support for Education Week’s coverage of the implementation of college- and career-ready standards and the use of personalized learning. The publication retains sole editorial control over the content of this coverage. Hughes also serves on the board of Editorial Projects in Education, the nonprofit publisher of Education Week.)

He begins his new role at the foundation on June 1.

Photo of Hughes courtesy of New Visions for Public Schools.

Follow @EdWeekSCavanagh and @EdMarketBrief for the latest news on industry and innovation in education.