Teachers of math and English/language arts in states following the common-core standards are playing a strong role in developing or selecting the classroom resources they use, a report has found.

Educators at the secondary level also made those choices, but less often, according to the report, released by the RAND Corporation.

Teachers in the states aligned to common-core standards also reported relying heavily on resources selected or developed by their districts, said the report, released by the RAND Corporation.

The results are drawn from two web-based, nationally representative surveys given to a group of educators known as the American Teacher Panel, which form the basis of the research conducted last year by RAND. Teachers were asked about their perceptions of instructional content and their alignment with their states’ standards, and about what classroom materials they use and what factors influence their choices.

See the full survey results about the materials that math teachers choose, below.

An important note: Even if teachers said they or their districts have a lot of say selecting or developing resources, that doesn’t necessarily mean they crafted or picked those resources while rejecting commercial options. The teachers surveyed, in fact, could have been indicating that they have a lot of latitude in their own K-12 materials—and that they ended up selecting commercial resources as the best option for their classes, noted Julia H. Kaufman, a policy researcher at RAND and co-author of the report.

About 1,700 educators responded to the first survey, and 1,200 answered the second. The authors broke down the survey results from teachers in states that use standards acknowledged to be “similar or adapted from” the common core.

Respondents in common-core aligned states were asked how frequently they use various instructional materials during the 2015-16 academic year. The options included resources they found or created on their own, as well as big, openly licensed education catalogs like EngageNY, and commercial texts from various publishers.

Here are the results for math, which show huge portions of educators saying they selected or developed their own materials: 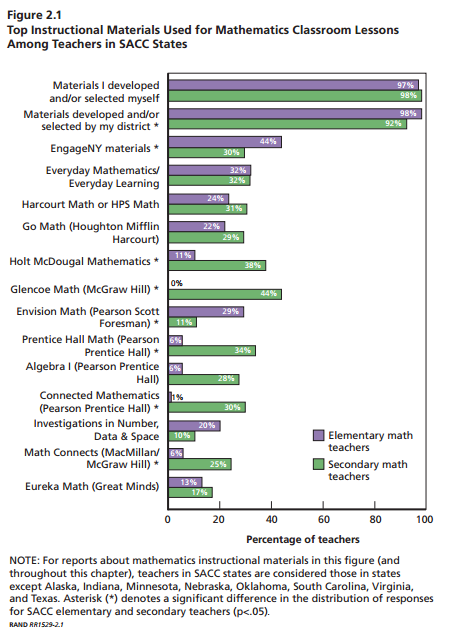 While responses were collected from both secondary and elementary teachers, the authors point out that some of the resources educators were asked about are meant to be used at one set of grades more so than another, which could affect how educators responded.

The authors point out that the report is not meant to provide a causal connection between the adoption of the standards and the instructional materials that teachers use. But the research may offer clues on how state standards, including the common core, are influencing teachers’ use of classroom resources. More than 40 states originally adopted the common-core standards, though many have backed away from them since then.

In another finding in RAND’s research, math teachers in states with standards aligned to the common core appear to be relying on instructional materials tied to those standards to a greater extent than their peers teaching English/language arts.

But “there is less evidence of the role that state standards may be playing” in English/language arts use of instructional materials, says the report, which suggests those educators may be focused on other, pressing concerns.

For instance, the “dominant materials” used by English/language arts educators at the elementary level are “leveled” resources, in which students are given texts at their the reading level, rather than their grade level. That’s especially true among teachers who work with large populations of English-language learners and students from economically disadvantaged backgrounds.

The report also found differences in how teachers at different grade levels use instructional resources.

Elementary teachers, for instance, report being required to use specific materials more often than teachers at the secondary level. Secondary teachers were also less likely to report drawing on district instructional materials, and more likely to find resources on their own.

“It’s kind of a double-edged sword,” Kaufman, of RAND. Secondary teachers “get freedom [to choose materials] but they don’t get as much guidance.”