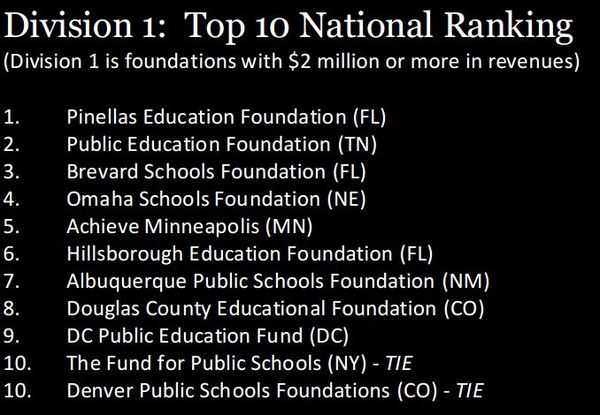 A new study of the top 50 local foundations that support K-12 districts found that Florida and Texas are home to some of the top-performing nonprofits that support students and teachers in districts. It also shows that the Pinellas Education Foundation in Florida has, for the second year, taken the number-one spot among foundations with $2 million or more in revenues.

The foundations of the 200 most populous school districts were evaluated by dewey & associates, a management and strategy consulting firm, as were high-performing foundations in smaller districts in 2013. These nonprofits raised $350 million in revenues, held $425 million in assets, and spent $181 million on programs and grants. They also benefited from the services of 67,000 volunteers that year.

The study’s purpose is to emphasize the importance of K-12 education foundations while recognizing those that do it best, according to Caruthers. “More people should know what their local education foundation is doing to dramatically improve the student learning experience,” wrote Caruthers in a release accompanying the report.

This study is helpful in capturing the work of education foundations nationwide, said Nina Menis, the executive director of the National Schools Foundation Association in Naperville, Ill.

“In public education there’s really not a lot of funding within the budget for innovation, and that’s one area that education foundations are involved in across the country—supporting teachers with grants or innovative ideas folks would like to try,” said Nina Menis, the executive director of the National Schools Foundation Association in Naperville, Ill. “It’s amazing what a teacher can do with a $500 grant.”

Foundations are also helping to remove barriers to success for young people, from partnering with food pantries to provide breakfast to offering homework help or tutoring. They also sometimes provide support for capital campaigns. Foundations’ services track the needs of students in the community, regardless of the size of the district they support, Menis said.

An abbreviated list of the top 10 is listed in the graphic above. The top 30 K-12 education foundations in the nation in the $2 million and above range are:

13. The Foundation for Osceola Education (Fla.)

15. The Foundation for Tulsa Schools (Okla.)

Image credit: The box at the top of this post was originally published by dewey & associates in their report, “Stepping Up: The Nation’s Top K-12 Education Foundations 2015.”