The U.S. ranks 19th out of 30 countries in the outcomes it gets from its investments in education, according to “The Efficiency Index: Which education systems deliver the best value for the money?,” a report released Thursday by GEMS Education Solutions, a London-based education consultancy.

Finland, Korea, and the Czech Republic were deemed the most educationally efficient countries in the study, which is based on 15 years of data from members of the Organization for Economic Cooperation and Development.

Researchers used composite achievement results from the 2012 Programme for International Student Assessment, or PISA, as the performance metric, and weighed those scores against 63 “inputs,” or factors that could influence educational outcomes, such as teaching materials and technology, the quality of school buildings, and teacher training.

Only two factors in the statistical model were found to have an impact on PISA results: changes in teachers’ salaries and class size. The United States would have to reduce teacher salaries about 5 percent below their current average of $41,460 and increase class size by 10 percent—to nearly 17 students per teacher—to be optimally efficient, the researchers said. 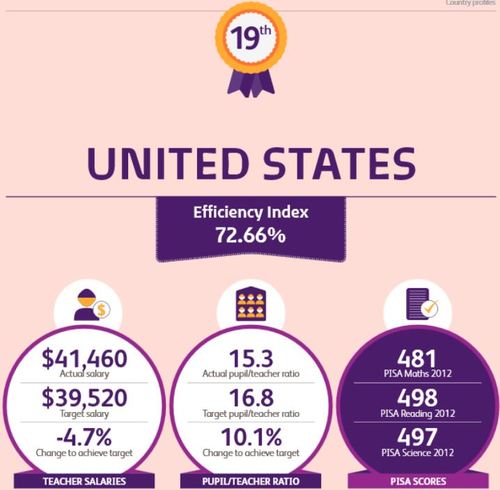 The performance differences among the countries “cover less than a quarter of the variability in outcomes that are observed between schools and pupils,” acknowledged Andreas Schleicher, the director for education and skills, and special advisor on education policy to the secretary-general of the OECD, in his introduction to the report.

For instance, socioeconomic differences among students in various countries were not considered, said Adam Still, a co-author of the report and an education finance and development specialist for GEMS, in a phone interview. Rather, they focused on factors that education policymakers could influence, he said.

However, Schleicher wrote that the efficiency index is important because it “breaks the silence on the efficiency of educational services,” and raises questions about what is possible for improving educational return on investment during tight budgetary times. Some of the countries with the highest efficiency ratings do not pay the highest salaries, nor do they have the lowest student-teacher ratios.

“Korea and Finland are at the top. They, relatively speaking, have large class sizes. They both pay moderate wages by comparison, and wind up on top of the rankings,” said Still. “If you visit those two systems, they will look and feel quite different, but both achieve highly in terms of PISA scores.” In fact, five of the top 10 countries in the efficiency index are also in the PISA top 10—Finland, Korea, Japan, Slovenia, and Australia.

Near the bottom of the efficiency index are countries such as Germany (25th) and Switzerland (28th), which rank seventh and third, respectively, using the PISA score metric. In those countries, increasing the relatively high salaries for teachers would not improve student performance.

Countries can be inefficient for underpaying or overpaying teachers, the study indicates. Brazil (30th on the list, and 29th for PISA), like Indonesia, is inefficient because its low pay for teachers makes it difficult to attract them. The report’s authors conclude that modest extra expenditures in those countries would result in “significantly” better educational outcomes. 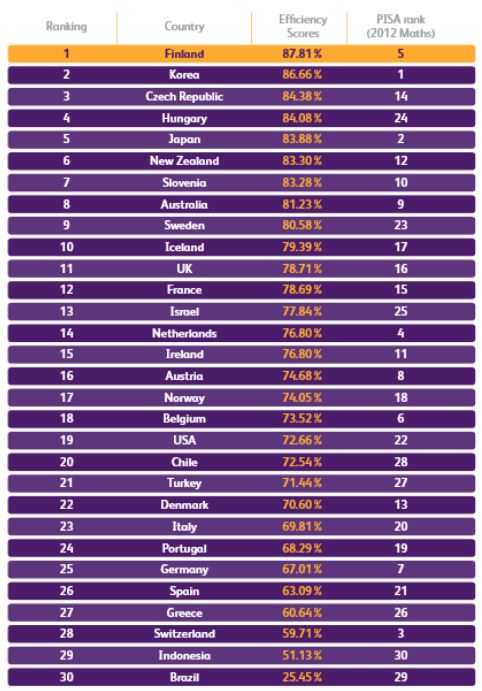 Some might question whether PISA scores are a reliable enough indicator on which to draw conclusions about what can “move the needle” on student achievement. When Education Week writer Liana Heitin reported on the latest round of test scores last year in “U.S. Achievement Stalls as Other Nations Make Gains,” she blogged about a cautionary note, “Avoiding ‘MalPISAnce’: Caveats on International Test Rankings.”

Still, who holds a masters degree in mathematics from Oxford University, and is a graduate of the Teach First program in the U.K. (an across-the-pond cousin of Teach For America in the U.S.), said the econometric analysis applied to the OECD data is “relatively advanced, well-trusted and valid.” It is used in other industries and sectors, which have also been held up to standards of performance basedon metrics. (Here’s an international study on efficiency in health care systems, for example.)

“We’re not directly prescribing that these changes should be made,” he said. Rather, it’s a lens through which to evaluate education. He equated it to the concept as it applies in the automotive industry. “If it wasn’t for the car industry striving for fuel efficiency, it wouldn’t have innovated to produce hybrid cars. If you don’t hold up a lens, maybe you don’t find reasons to innovate,” he said.

Alas, in July, the U.S. also ranked low in an international innovation study based on data from OECD countries.

Credit: Infographic and Efficiency Table are from The Efficiency Index: Which education systems deliver the best value for the money?