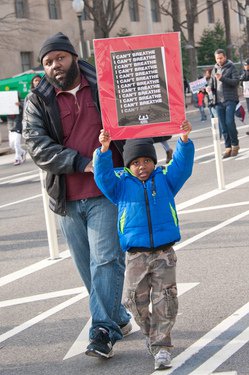 A recent Time Magazine cover vividly depicts one black man running away from a large group of police officers who charge behind him on a street in Baltimore. The headline reads: “America, 2015&mdash;What Has Changed. What Hasn’t.” The controversial deaths of countless men of color this year, from Walter Scott to Freddie Gray, represent the tip of the iceberg for chronic race-related trauma that people of color in America are experiencing regularly. The ensuing protests and cries for justice reveal long-festering sores that stem from years of institutional, nearly incomprehensible, and depressingly chronic oppression of communities of color in America.This unfortunate state of racial upheaval hurts our students of color. But people who work with our youth can do something about it.

In  Howard Stevenson‘s book, Promoting Racial Literacy in Schools: Differences that Make a Difference, he discusses how “face-to-face racially stressful encounters that reflect racial profiling in public spaces fuel social conflicts in neighborhoods, and undermine student emotional well-being and academic achievement in the classroom.” Moreover, he writes about how educators, parents, and community leaders can help resolve some of these stressors by speaking to children about their experiences and asking them to express their feelings.

During a workshop Dr. Stevenson presented on this topic at the recent Coalition of Schools Educating Boys of Color (COSEBOC) gathering. He noted how parents, educators, and community members often engage students with difficult conversations on nearly every topic except for race. Dr. Stevenson illustrated this by saying, “You can ask just about any kid in America about taking candy from strangers and they will respond that they are not supposed to do it. When asked if they’ve ever been offered candy from strangers, they say no.” Meanwhile, when a student experiences racism, they do not know what to do because conversations about race are often taboo. Dr. Stevenson notes that people are often reluctant to hold conversations about race with children for fear of saying the wrong thing or that talking about race is somehow inherently damaging. Dr. Stevenson, argues against this sentiment and posits that there is value in simply allowing students to express their feelings about racially stressful experiences.

To demonstrate this point at the COSEBOC gathering, Dr. Stevenson had the audience&mdash;comprised of educators and boys of color&mdash;talk to each other about stressful experiences in their lives surrounding race. During the activity, one young man of color, now a college student, spoke of a time when he and his friends were outside waiting for the bus in Queens, N.Y.. Before the bus arrived, a group of police officers drove up and arrested them, without telling them why. In the middle of the story, the young man stopped, choked up with tears, because this experience clearly impacts him to this day. He wept, sharing that his mother always made him promise never to be in the back of a police car. Despite his best efforts, this student ended up in the back of a police car anyway, but as the victim of racial profiling. Later, he found out that the police were looking for grown men with similarly colored shirts who had committed a crime in the neighborhood. The room was full of stories such as these. Speaking for myself, getting my own stories off my chest felt good. Simply articulating my feelings&mdash;instead of bottling them up&mdash;seemed tremendously helpful and it appeared that others were finding immense value in the exercise as well.

In the time we live in, there are a large number of people who simply do not acknowledge the existence of racial trauma and oppression. Despite concrete empirical data that show disparities in employment, incarceration, and housing based solely on race, a portion of our society miscategorizes authentic dialogue about race as race-baiting. These “what racial problems?” sentiments can present barriers for students attempting to heal and seek treatment. To help our students navigate racial trauma, we must provide spaces for them to have honest conversations about their stressful experiences related to race. We must not invalidate their stories and we simply need to give them the “ok” to share.