For education technology companies thinking of testing out the European market, here’s the good news:

Europe collectively spends $1 trillion annually on education. There are 500,000 schools and 110 million students. And individual countries and their schools—much like those in the United States—are hungry for digital tools and systems that will improve teachers’ instruction and students learning, particularly their preparation for college and the workforce (See the chart laying out some of the relevant data, below.)

But a panel of education company officials and advisers on the European market, speaking at the South by Southwest conference here today, also gave a frank assessment of the barriers that many companies face in trying to sell tech products on a continent marked by different systems of government, economic systems, and languages.

One of the biggest barriers, especially to younger companies, is the lack of capital flowing from investors. Whereas the United States has seen a vast tide of money pouring into K-12 ed-tech, far fewer sources of private equity are available in Europe, said Charles McIntyre, the co-founder of EdTech Europe, an organization that seeks to support digital growth on the continent. McIntyre has also worked as a venture capitalist in the United Kingdom.

“There’s a lot of innovation out there. Access to funding is the real problem,” McIntyre said.

While the potential market in schools is larger than in the United States, he added, “risk-taking capital is in short supply.” When investment money becomes available, there’s a “queue around the block.” 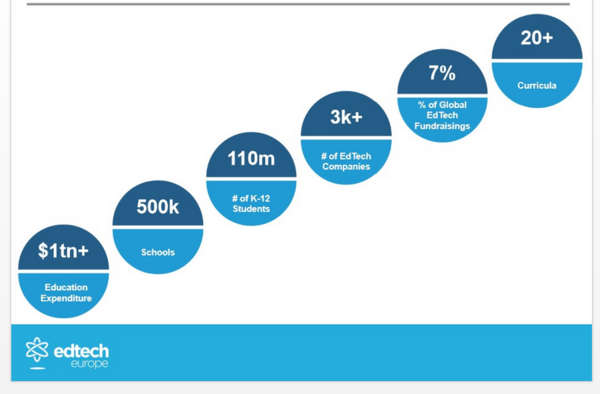 McIntyre was joined on the panel by Kelli Campbell, a senior vice president at Discovery Education, a major content provider that has done work in Europe, and Rob Grimshaw, the CEO of TES Global, a digital education company that supports teachers. With 6.8 million registered users, TES Global describes itself as the world’s larges tonline community of educators.

Campbell said that the companies poised to do well in Europe, and internationally, are those that create content that is modular: If it doesn’t do well in one market, it can succeed in another.

And Grimshaw suggested that companies that can tap into networks of teachers, and appeal to them directly and have those educators vouch for their products, can prosper. (The direct-to-teacher strategy is used many many companies in the U.S. education space, with mixed results.)

At the same time, the lack of consistent education priorities across countries poses challenges for vendors, McIntyre said. In the United Kingdom, many of the buying decisions in education are made almost school-by-school, he said. In Sweden, spending priorities are set regionally, and in France, much of the decision-making occurs at the national level.

It’s not surprising, McIntryre said, that the ed-tech market is growing in Scandanavian countires, where companies can see “clear decision-making avenues” on what schools are looking for.

Ultimately, for a company to succeed someplace like England, where decisions are made almost “building by building,” ed-tech companies have to prove themselves again and again so that word spreads, Campbell said. “It comes back to results,” the Discovery official added. “It’s not [about] a pitch. It’s showing results.”

One U.S.-based company that is making inroads in Europe, PenPal Schools, is doing so by marketing its product directly to teachers. PenPal is an online platform that matches students and schools, in the United States and worldwide, through a website and app and allows them to share lessons and perspectives

At least 65 percent of PenPals’ business is in the United States, but it’s being widely used in Europe, particularly in the United Kingdom, said Joe Troyen, the company’s founder, who attended the session on the European market.The company has 60,000 total users, in 63 countries.

“We go straight to teachers,” said Troyen. “We don’t want it held hostage, waiting for school districts” to buy it.

2 thoughts on “Europe a Tantalizing, if Hard-to-Crack, Ed-Tech Market”