Welcome to the first two weeks of school, when an estimated $330 million will be spent fixing a myriad of problems that arise in K-12 facilities, according to a company that tracks such maintenance.

More than half of the “school’s in session” repair bill—nearly $170 million—will be spent to fix air conditioning, according to SchoolDude, the company that conducted the study.

Other pesky, and costly, problems schools address in the opening weeks include fixing leaks, repairing doors and floors, and removing pests. After air conditioning, the most frequently reported problem involves locks and keys, with more than 166,000 incidents. (See the table below.) 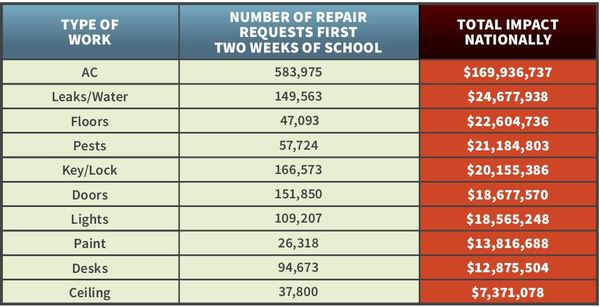 To arrive at the national figures, an analyst extrapolated data from reported repairs in the more than 4,100 public schools that use SchoolDude’s maintenance management platform. The estimate of how much schools spend in each category comes from reports of hourly labor costs, money spent on hiring contractors, and the price of parts.

The average public school devotes 15 percent of its repair budget to planned maintenance, according to Jed DeGroote, community engagement manager of SchoolDude. “The best in class do more than 30 percent,” he said. These numbers reflect the state of affiars after budgets for maintenance in school facilities have been cut for more than 15 years, he said.

In its “2013 Report Card of America’s Infrastructure,” the American Society of Civil Engineers gave the country a “D” for the conditions and performance of the nation’s schools, about half of which were built for the Baby Boom generation between 1950 and 1969. One estimate put the cost of renovation and maintaining public schools at $127 billion, according to the report. The most recent comprehensive national look at the condition of school facilities is, itself, dated. The National Center for Education Statistics published that report in 1999. Ten years before that, the Education Writers Association investigated the problem in a report entitled, “Wolves at the Schoolhouse Door: An Investigation of the Condition of Public School Buildings.”

If school facilities are old, the equipment in them isn’t much younger. DeGroote said many schools he works with are trying to keep a 28-year-old heating, ventilation, and air conditioning system running, when the anticipated useful life of that equipment is more like 20 years.

It would take more than $5,500 per student to catch up on deferred maintenance costs, DeGroote estimates. That amount would allow schools to cover maintenance costs for the facility repairs and upgrades like replacing roofs or boilers, but not technology upgrades, he said.