In many states this year, lawmakers and governors have feuded mightily over budgets and how much money to set aside for schools. California officials are by no means above partisan and even intra-party squabbling, but Democratic Gov. Jerry Brown and the Democrat-controlled legislature approved a budget this year that is shaping up to be one of the most generous packages for K-12 in the country.

The state’s budget for fiscal year 2017-18 will boost spending on pre-college education by more than 4 percent, from $63.1 billion to $65.96 billion. It’s a spending plan that also gives local districts a relatively strong amount of flexibility to put money toward their own priorities, without state mandates. 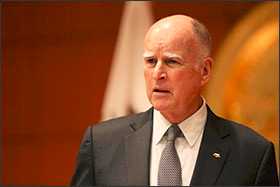 The spending blueprint offers good news for K-12 districts in California, certainly in comparison to what’s played out in other states. And that means it most likely offers opportunities for companies trying to win school business in the nation’s most populous state.

Early childhood education programs will see a substantial increase under the budget, of roughly 15 percent, as will afterschool programs, which will be given 9 percent more than last year.

“The legislature and governor clearly showed their strong and ongoing support of high-quality public education in California,” state schools Superintendent Tom Torlakson said in a statement. “When we invest more in our students, we help them succeed on their way to 21st century careers and college.”

In addition, the spending plan creates a one-time fund of $877 million in discretionary funding for districts, with school systems being handed broad latitude on how to use that money. Other sources of money, delivered through what is known as the local control funding formula, also give districts running room on spending, said Ryan Anderson, a fiscal and policy analyst with the California Legislative Analyst’s Office.

Here’s a breakdown of how some individual programs fared: 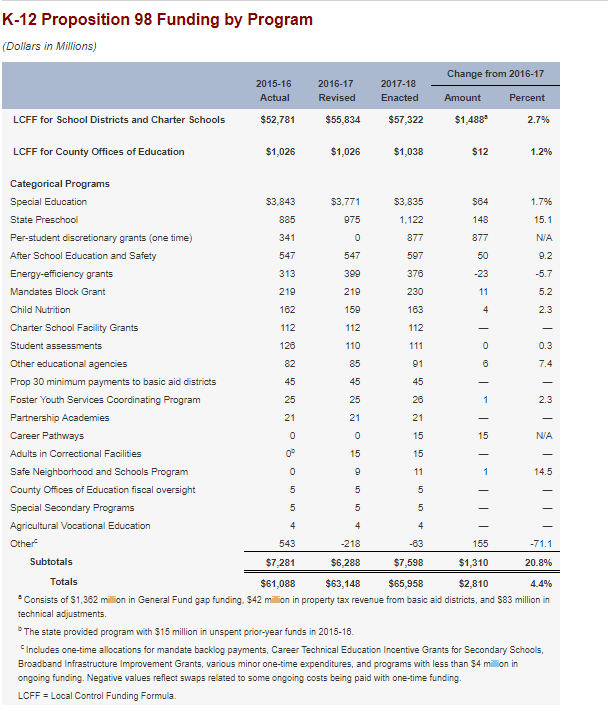 Anderson says California districts have shown an interest in using the new money coming their way to meet a variety of priorities. Many of them are still trying to rebuild programs that were gutted during the Great Recession.

They also want to hire more teachers and staff, to make up for the ones they let go during the bleak days of the downturn. And they want to pay those educators more, to convince them not to flee for higher-paying jobs.

Sacramento policymakers used to place tighter controls on how school districts spend money. But the state has moved away from that approach in recent years. An important policy change came with the creation of the local control funding formula, four years ago, which replaced many categorical programs with discretionary ones, noted Anderson.

“Under the previous system the state was much more prescriptive in how dollars were spent,” Anderson said. “There was a philosophical shift [toward] more flexibility.”

Many states around the country this year have coped with weaker-than-expected tax revenue collections. And GOP-controlled legislatures and Republican governors in a number of states have approved spending increases for education only reluctantly, desiring to control costs or make structural changes to school funding or accountability.