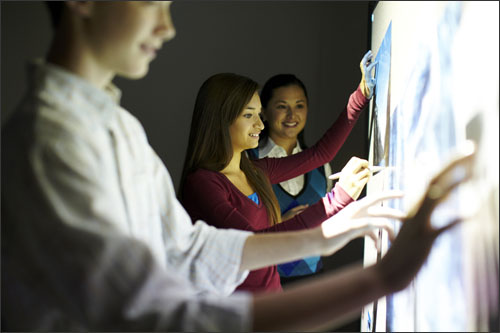 Promethean World PLC, a U.K.-based business that made a name for itself selling interactive whiteboards in the United States and abroad, will be purchased by NetDragon Websoft Inc., a Chinese online game and mobile Internet platform company, for a share price that amounts to about $130 million in cash, it was announced Friday. Both companies are publicly held.

Leaders of the two companies started talks about partnering late last year, said Steve Benfield, Promethean’s chief strategy officer, in a phone interview Friday. “We had been looking to expand into the Chinese market—we do have a factory and business there,” Benfield said. At the same time, NetDragon, which had sold the second-largest app store in China to Baidu for the equivalent of nearly $2 billion, wanted to “do something significant in education, and they wanted to do it worldwide,” he said.

Promethean, which Benfield estimates has a 25 percent to 30 percent market share in the U.S., does business in 110 countries and has products in 1.3 million classrooms worldwide. It gets about half its revenues from North America and the other half internationally, he said.

Details of the announcement came in an email to customers from Vincent Young, Promethean’s vice president of global and North American marketing.

NetDragon Websoft “is committed to becoming a pioneer in developing a transformational online and mobile education ecosystem platform,” wrote Young. The Chinese company’s strategy is “to develop a global education ecosystem that will empower students and learners to learn more efficiently and effectively,” he told customers in the email.

Choosing Promethean as a partner means acquiring a company that was founded in 1998 and grew by selling interactive displays. Promethean Planet is the name the company gave to its online, interactive education community. Early last year, the company expanded its software and online offerings with the introduction of ClassFlow, an interactive lesson-delivery and formative-assessment system. Young wrote that NetDragon intends to continue developing and enhancing Promethean’s brand and market expertise.

“Over the past two or three years, we’ve been transforming Promethean’s business model,” said Benfield, from interactive whiteboards and front-of-class devices, to incorporate software designed to improve student engagement and motivation. That shift “should improve student outcomes,” he said. Last year at the ISTE show, the company launched ClassFlow, an interactive lesson-delivery system for 1-to-1 computing and bring-your-own-device programs in schools.

The cash infusion from NetDragon will help Promethean with a “very aggressive road map for ClassFlow, and the hardware to support it,” said Benfield. He said ClassFlow is used in 44 markets and 20 languages and works with a variety of interactive devices.

NetDragon develops and operates games and mobile Internet platforms, Young said in his statement. The Chinese company underwent an initial public offering to sell stocks in 2007, and migrated to the Hong Kong stock exchange’s main board in 2008.

Reaction to the Sale

George DeBakey, an education business consultant who focuses on the international marketplace, said he has seen more Chinese and Korean companies “moving aggressively in education.”

“It doesn’t surprise me to hear about this acquisition,” said DeBakey, the president of DeBakey International, a Potomac, Md.-based firm. After seeing how many Chinese companies attended the Bett Show (formerly known as the British Educational Training and Technology Show), an annual trade show in the United Kingdom that highlights the use of educational technology, DeBakey said he would expect to see more transactions like this one.

Futuresource Consulting, a United Kingdom-based research and analysis organization, follows the interactive display market. Mike Fisher, Futuresource’s associate director of the education division, said in an email that the sale is intriguing for a few reasons. The global market for interactive displays has hit a plateau in the United States and some other markets, he noted, as hardware spending has increasingly focused on tools and platforms that will support districts’ 1-to-1 initiatives. In China, the interactive whiteboard market “is growing rapidly,” he said, but the mammoth market is primarily served by local providers.

As the interactive whiteboard market has flattened in several countries, Promethean has increasingly focused on its software offerings, especially ClassFlow, Fisher said.

But the acquisition could benefit the Chinese company in other ways, by giving it access to Promethean’s customer base, and an “established route to market,” Fisher said.

The deal is expected to be completed within the next two months, subject to customary closing conditions and necessary approvals. Benfield said NetDragon committed to a 40-pence-per-share purchase price. At Friday’s exchange rate, that would place the value at between 90 cents and $1 per share, equating to approximately $130 million.

Update: This blog post was updated at 5:45 p.m. July 14 to include comments from Mike Fisher of Futuresource Consulting.