About half the nation’s school district administrators have at least a general awareness of open educational resources, but their understanding drops when they’re asked specific questions that get beyond a surface-level understanding of those materials.

Those were among the takeaways in a newly released survey by the Babson Survey Research Group, which found that 31 percent of K-12 officials polled said they were generally “aware” of open educational materials, and an additional 19 percent said they were “very aware.”

But the authors also sought to probe administrators’ depth of understanding of open resources. And when asked detailed questions meant to test the rigor of their knowledge, school officials’ acumen was not as impressive.

Open educational materials are typically defined as resources that either live in the public domain or are created on licenses that allow them to be freely shared, altered, and repurposed. (It’s not enough, by that standard, for them to simply be offered for free.)

When the survey authors asked K-12 officials if they were aware of both open educational materials and licenses issued by the organization Creative Commons—a prominent organization that undertakes that work—the portion of respondents who were “very aware” of open resources fell from 19 percent to 13 percent. The number who were “aware” drops from 31 percent to 15 percent.

And the portion who were “somewhat aware” fell from 15 percent to 6 percent. (Strong majorities of respondents, however, claimed a general understanding of the copyright status of classroom content and public-domain licensing.)

District officials in smaller K-12 systems—those with fewer than 1,000 students—are much less aware of open resources than district officials in larger systems, according to the survey results, released in a report titled “What We Teach: K-12 School District Curriculum Adoption Process, 2017.” The Babson Survey Research Group is an independent entity affiliated with Babson College in Massachusetts.

Sixteen percent of district officials surveyed said they had adopted at least one full-course open curriculum. But when the administrators were given a list of names of K-12 materials classified as open educational resources—spanning 14 different combinations of subject areas and publishers—a much larger number, two-thirds of those surveyed, said they were aware of at least one of those materials.

The best-known and most widely adopted of the open resources was Eureka Math/Great Minds. A pair of resources created by New York state in English/language arts and literacy also fared well. The overall level of awareness of individual products ranged from more than 50 percent to under 10 percent, the survey revealed. Here’s a list of individual products, ranked by the awareness level of K-12 officials: 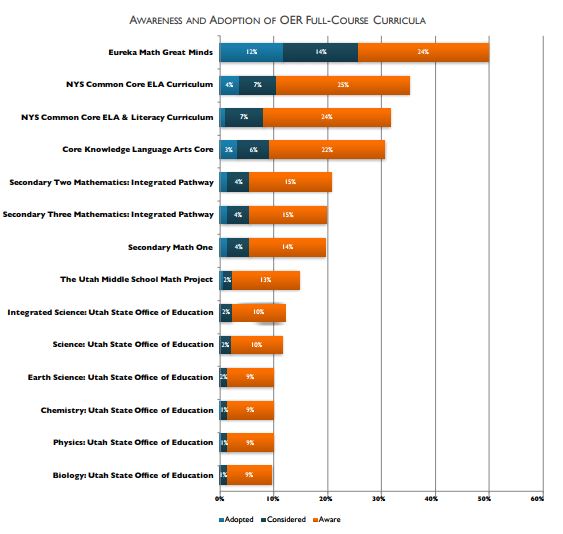 The nationally representative survey drew responses from 584 K-12 school district administrators who are involved in curricular decisions, said Jeff Seaman, the director of the Babson Survey Research Group, in an interview. The surveys were collected during the spring of 2017 in 48 states and the District of Columbia.

In addition to looking at open educational resources, the authors of the study also sought to probe the overall factors that prompt districts to adopt new curriculum across academic subjects.

One of the takeaways is that the need to adopt new standards or change them is a very strong factor in replacing previous curricula—cited by 69 percent of those surveyed. Other factors—such as teacher or district dissatisfaction—ranked much lower.

Once materials get adopted, they tend to stick around for a while. A strong majority of district officials, 57 percent, said their previously adopted curricular material has been in place for 6-10 years. An additional 23 percent said the materials had been in place more than a decade.

But when decisions get made, they get made fairly quickly, the Babson survey found. The entire curriculum-adoption process typically takes less than a year from beginning to end.

Among other takeaways from the from the report:

For K-12 vendors trying to interpret the survey results, one message is that most district officials are not drawn into buying new curricula because they’re wowed by a new set of materials. The overriding concern among district decisionmakers is whether the resources are a match with the standards.

“The ‘build-it-and-they-will-come’ approach, where an alternative is so compelling that districts rush to adopt it, will NOT work,” the report says. “School districts do not engage in an adoption process because they have found a compelling curricula alternative. Almost all decisions are driven by a belief that the current materials no longer meet current standards, not by the characteristics of potential alternatives.”

The notion that districts replace curricula because of a more-enticing alternative “never showed up” in the results, said Seaman, a co-author of the survey. The strongest motivation among districts was because what they have “no longer meets what the standards are.”