Chief technology officers and other district IT leaders play a substantial and growing role in decisions about buying supplemental academic materials, formative assessment resources, and other products, according to a new survey.

The 2017 K-12 IT Leadership Survey Report, released this week by the Consortium for School Networking, is based on nearly 500 responses collected earlier this year from district IT leaders. The report offers a variety of insights about district needs and leadership that can inform education companies’ efforts to find buyers in the market.

This year, 53 percent of the respondents to the consortium’s survey described themselves as chief technology or chief information officers. Other respondents included school technology leaders, tech coordinators, and directors or managers responsible for digital implementation.

A strong majority of those surveyed by the consortium, 75 percent, said they play at least a moderate role in district decisions to buy digital content. A smaller portion, 31 percent, described themselves as key influencers–about the same portion as in the previous year.

A small, but growing, portion of respondents, 16 percent, said they are “decisionmakers,” in tech purchasing. That’s up 8 percent from the previous year.

“These shifts toward greater purchasing influence suggest that where digital content is concerned, districts are recognizing the importance technical integration plays in the ability of content to affect student outcomes,” say the authors of the report.

When it comes to K-12 districts making decisions about buying specific types of products–from formative assessment to teaching aids to core curriculum–the survey found that IT officials said their involvement varies by product: 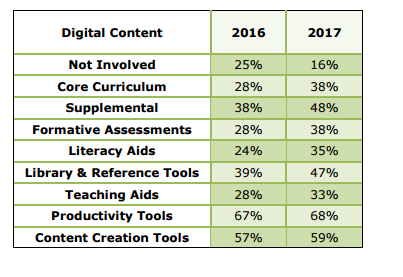 This year’s survey also was the second by COSN to ask district tech leaders about their interest in open educational resources–materials that either exist in the public domain or are created on a license that allows them to be freely shared and altered by users.

Nearly 80 percent of survey respondents said that open educational materials are a part of their districts’ digital content strategy. Thirty-five percent described it as “very important” or “extremely important.”

The following chart offers a breakdown of how district officials see the availability of open content affecting their choices in the years to come: 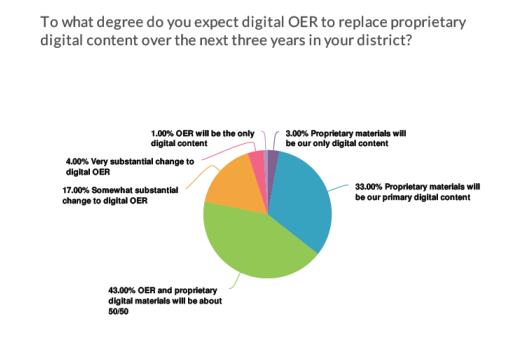