Florida officials are delaying the adoption of a wave of new instructional materials in math and English/language arts in the wake of Gov. Ron DeSantis’ recently announced push to scrub the state’s standards of any influence of the common core.

A document posted on the state department of education’s website on Wednesday puts forward a revised adoption schedule that is supposed to mesh with the governor’s proposed standards overhaul.

The revised schedule—which the state’s department of education confirmed to EdWeek Market Brief—covers a variety of subjects up for adoption, from world languages to social studies to science.

But the subjects that are of the most immediate interest to publishers around the country are in math, because that adoption cycle had already been underway, and in English/language arts, which had been scheduled to play out in 2019 and 2020.

Florida is one of the biggest K-12 markets in the country, and getting on the list of approved materials can give curriculum companies potential entry to vast amounts of business in the state’s school districts. The importance of getting on the Florida adoption list was evident in the swarm of companies that sought to have their math materials approved:  140 bids from vendors around the country were submitted, according to the state.

The state’s document also indicates that current contracts for instructional materials in math, ELA and other subjects that were set to expire will be extended, though it offers no details on that process.

See the full, revised schedule, below: 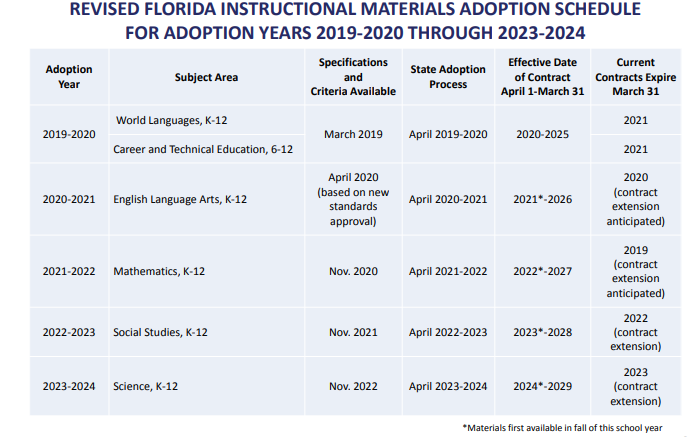 The decision comes in the wake of Gov. DeSantis signing an executive order two weeks ago that the state review its current standards and eliminate all traces of the Common Core State Standards from them.

The order from the Republican governor, who was elected last fall and criticized the common core during his campaign, orders the state’s commissioner of education to review the current standards and craft a plan to “eliminate” the common core. (See my colleague Stephen Sawchuk’s post on the subject.)

But how DeSantis’ plan will actually play out in districts–and in the marketplace–remains unclear.

The Common Core State Standards are academic benchmarks established by a group of states that spell out what students should know in English/language arts and math. In the years after they were finalized in 2009, 45 states and the District of Columbia adopted them, with governors and legislators from both parties arguing that they would set a high bar for students to reach.

But a backlash soon followed, led mostly by political conservatives suspicious of the Obama administration’s support for the standards.

Florida answered those critics in 2014 by revising its standards. But while the standards stripped the common-core branding from the documents, they remained substantially linked to the common core.

DeSantis’ executive order did not offer specific critiques of the standards’ content, but it calls for a “return to the basics of reading, writing, and arithmetic.”

A Flood of Applicants

In Florida, when vendors have their print and digital materials approved by the state, it means districts can use state funds to buy them. But getting on the adopted list is also important, more broadly, because K-12 districts tend to see the state-approved list as an important reference document for determining which commercial materials marketed to them are high-quality.

Two other important K-12 markets, Texas and California, have given districts more flexibility in recent years to stray from the state-adopted list. Florida has also granted districts more leeway. State law says that districts can spend up to 50 percent of the money they get from the state for other materials that assist with instruction. And the law also gives districts freedom to use different materials if the district can prove they meet various benchmarks.

Where are education investors making their bets in 2019? Tune in for EdWeek Market Brief’s webinar on Feb. 22 to find out. Our presenters include Jennifer Carolan and Jen Wu of Reach Capital and Amit Patel of Owl Ventures. They’ll talk about trends they see, and what’s on the horizon.

A long list of publishers had already submitted materials to the state in math this cycle, hoping to get on the list of adopted materials. They include some of the biggest names in the industry, as well as mid-sized and smaller companies. Pearson, McGraw-Hill Education, Houghton Mifflin Harcourt, Curriculum Associates, Great Minds, and others were among the applicants.

In English/language arts, companies were originally expected to give the state notice of their intent to bid by April.

It’s unclear what the adoption of new standards—and the revised schedule—will mean for publishers who have already submitted math materials. Presumably, they would have to re-submit new materials later, to meet the state’s new adoption deadlines.

Diana Snider, the president of the Florida Council of Teachers of Mathematics, said she needs to see what ideas emerge about changing the math standards, before passing judgment on the governor’s plan.

DeSantis’ comments about a need to return to the “basics” of math, she said, probably reflects the complaints of some Florida parents that the approach to teaching math in the common core differs from what they’re used to.

Snider does think the current standards need improvement in some areas, such as at the high school level, where she sees too much repetition in how they cover algebra 1 and algebra 2.

To sort through that duplication and hone in on what’s essential in the standards, many Florida teachers turn to test-item specifications the state has put forward, which are more focused, Snider said.

But there are also many strengths to the standards, such as their focus on teaching both math procedures and broader math concepts, argued Snider, who is the manager of math, science, STEM, and arts education in the Palm Beach County school system.

As a result, Snider says the current generation of Florida students—including her middle-school-age sons—“have the ability to problem-solve in a variety of ways,” that were not encouraged before.

“They’re not just writing an answer that comes out of a calculator,” she said.

Ultimately, Snider says her organization wants to be “active participants” and have a “seat at the table” during the standards overhaul.

Whatever the outcome for educators and publishers, the governor’s proposal seems to have struck the right note with the general public. Fifty-two percent of residents approve of eliminating the common core from state exams, and just 21 percent disagree, according to a poll released by Florida Atlantic University.