It’s easy for vendors to talk a good game on the issue of “interoperability.”

Now they’re being asked to give their word that they will uphold that principle in a broad and meaningful way.

A new effort unveiled at the ASU+GSV conference asks ed-tech companies to sign a “vendor pledge” committing that their digital tools and platforms will meet a standard for interoperability, which is defined as the seamless, secure, and controlled exchange of data between applications.

The pledge is the work of Project Unicorn, a group that is a part of Innovate EDU, a New York-based nonprofit focused on closing gaps in student achievement through new learning models and tools.

At many schools, teachers and students often have to struggle through a sea of sign-ins and other roadblocks to access their district’s myriad digital tools. Project Unicorn, like some other school advocacy groups, believes the sharing of data through interoperability will make it easier for teachers and students to make use of tech tools and content when they need it.

Many ed-tech providers are confused by state and local policies on student data privacy. On April 27, EdWeek Market Brief will host a webinar offering practical advice on how companies can stay in check with the law, and create products that help students and teachers. Sign up here.

The pledge, and a rubric Project Unicorn created for evaluating vendors, defines interoperability in a way that goes beyond simply cutting through sign-on woes to promoting coherent sharing of data throughout schools, without educators getting shut down while shifting between different proprietary digital platforms.

It remains to be seen how many vendors will agree to the terms of the pledge—or if they stick to what they promise on paper.

As of the time of the announcement at ASU/GSV, a conference that attracts companies across the education industry, 21 vendors had signed on, said Erin Mote, the executive director of Innovate EDU. She pointed out that her organization had started by creating a pledge for districts to demand interoperability, which has been signed by more than 400 K-12 systems.

Getting districts on board first was important, because it will drive company behavior, she predicted.

“We feel there’s a lot of momentum in this space, and we’re at a critical moment,” said Mote, in an interview. “Starting with the demand side is the right way to go…it’s up to all of us to hold this community responsible.”

More districts are putting interoperability requirements in RFPs, and over time, more will make it clear it’s not negotiable, she said. The goal is to have more K-12 leaders “telling vendors, ‘I’m not going to let you work in my district if you don’t sign the pledge.’”

The pledge created by Project Unicorn asks companies to commit to meeting four basic data interoperability principles—but then it goes beyond that, establishing a specific, detailed rubric for evaluating their companies’ performance.

The four basic principles for companies are that vendors help students and families make the transition to digital classrooms; advocate for data interoperability; meet specific standards for interoperability in software design and other areas within one year of signing the pledge; and aligning product infrastructure to eventually meet an even higher standard for interoperability.

The underlying rubric is meant to put teeth in those commitments, in areas such as the encrypted use of data and the import and export of data. It evaluates vendors’ interoperability on four tiers—and eight different dimensions of those tiers—with the fourth tier signaling the greatest degree of seamless, secure sharing.

The Tier 4 standard for “data granularity” for instance, calls for a vendor to provider four or more units of data available for “immediate export or import.” For the “export process” and “export security,” the pledge calls for custom API, and then encrypted data transfer with data restrictions and safeguards.

Here’s the full set of rubrics: 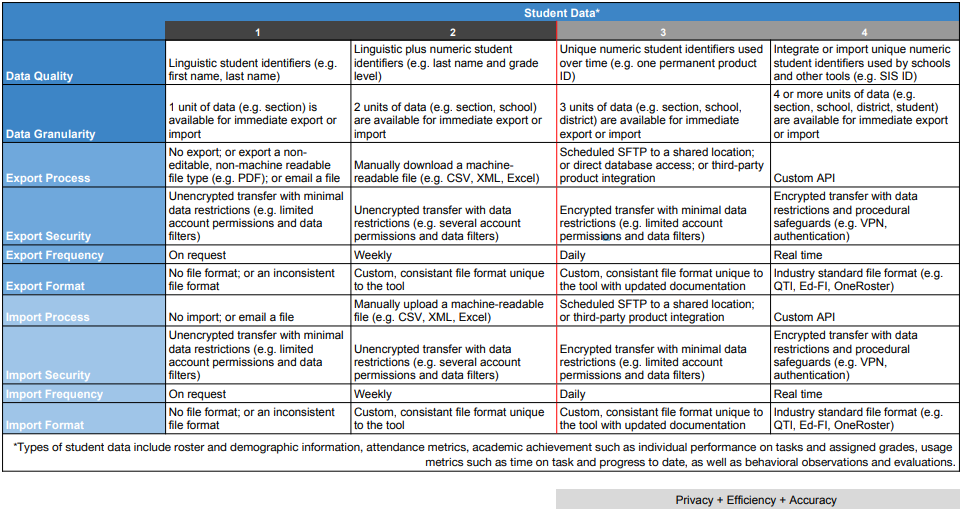 Project Unicorn is not just looking to collect signatures. The group, which is funded by the Michael & Susan Dell Foundation, will evaluate vendors that sign the pledge against their performance on the rubrics, Mote said.

“We’re not in this for one-to-two years,” she said. “It will take a while—probably a decade or more to get to Tier 4….This is a long haul.”

The vendors who have signed the pledge so far include McGraw-Hill Education, Edgenuity, Lexia, Learning A-Z, Abre, Cengage Learning, Epiphany Learning, WriteAbout, ClassLink, and Reading Plus.

The vendor pledge has the support of the Consortium for School Networking, a group that represents K-12 chief technology officers. Over the coming months, the consortium is planning to put out resources to its members that are meant to help district officials understand what questions to ask of tech companies on interoperability, said Keith Krueger, the organization’s CEO.

The consortium is also trying to explain to districts—including smaller districts—that they have the leverage and capacity to set expectations of ed-tech providers. The “silo-ing” of content now, carriers “big costs” for districts, Krueger said.

Interoperability that allows single sign-on across platforms is only a “first step,” on the way to sharing a much broader array of content, he added.

To date, the K-12 industry “has given superficial nods to interoperability,” Krueger said. “Having things in closed systems is the way they prefer to operate.”