Merger and acquisition activity in the education industry slowed during the first half of 2022 from a scorching pace set last year, a new analysis finds.

Overall, the dollar value of deals decreased from $19.3 billion in the first half of 2021 to $7.4 billion during the same period this year, according to research by the investment bank Berkery Noyes.

The largest transaction in the first six months of the year was the roughly $2.8 billion purchase of Houghton Mifflin Harcourt by Veritas Capital.

Education companies also were the subject of fewer transactions. The number of individual deals was down slightly, totaling 213 total mergers and acquisitions in the first six months of the year compared to 244 during the same period last year.

While the decline in the total value of education M&As on a year-over-year basis is steep, the $7.4 billion total during the first six months of 2022 still reflects a strong demand for acquisitions across the education sector, even in the midst of economic headwinds. Education organizations raised record-breaking sums in 2021, after the pandemic put a spotlight on tech-focused products. 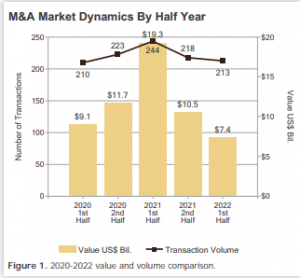 And overall, the value of deals is greater than it was a few years ago. The first-half total for 2022 in terms of dollar value of deals is $2.4 billion more than what the education sector recorded during the same time period in 2019, according to Berkery Noyes’ research. And that $7.4 billion figure falls a bit shy of the $8.2 billion in total dealmaking reported during the second half of 2019.

Private equity financed 32 percent of acquisitions during the first half of this year, an amount that is on par with the 2019-2021 overall average.

According to Berkery Noyes, 70 of the 213 deals during the first half of 2022 were financed by private equity, venture capital, or some other type of investment firm, a 14 percent decline compared to the same period a year ago.

Eight deals in the first half of this year were valued at more than $100 million, and at least two were in the K-12 sector. The ten largest transactions accounted for more than 70 percent of the total dealmaking dollars during the period.

Many teachers were forced to become adept at using unfamiliar technologies during the pandemic. In an Aug. 23 webinar, EdWeek Market Brief talks with those who prepare educators for the classroom and with a district tech leader about where teachers need the most support in using tech, and how ed-tech companies can help them by developing better products. You can register here.

In terms of the types of acquiring companies, strategic volume rose four percent on a half-year basis, from 137 to 143. Private equity volume fell 14 percent, from 81 to 70.

The industry’s biggest area of activity in the first half of 2022 was in the K-12 media and tech category with 52 transactions, down from almost 60 deals during the same period a year ago.

K-12 media and tech has become the dominant category for M&A activity in the education sector, according to Berkery Noyes. It surpassed professional training services as the education industry’s most active market segment in each six-month report issued by the investment firm going back to the beginning of 2021.