Education technology providers in China have drawn a surge of investment over the past two years, with much of that capital flowing from Asian companies pouring money into fast-emerging e-learning ventures operating in their backyards, a new analysis finds.

The overall educational market in China has proved enticing for many companies in recent years, including those based in the United States, which have established operations and connections there to try to capitalize on booming demand in areas such as English-language acquisition and college preparation and recruitment.

And, as is the case in the United States and many other countries, there’s a lot of demand in China for academic content that can be delivered through digital means, suggests the new research published by CB Insights, a New York-based market-research company.

Ed-tech companies based in China drew in $321 million in equity investments in 26 deals in 2014, CB Insights found. That represented an increase of 400 percent in funding, and 18 percent in deals, over the previous year. (See graphic, below)

This year, the dealmaking in China is continuing at a strong pace, with ed-tech companies in that nation having raised $317 million in less than two quarters, only slightly less than the total for all of 2014: 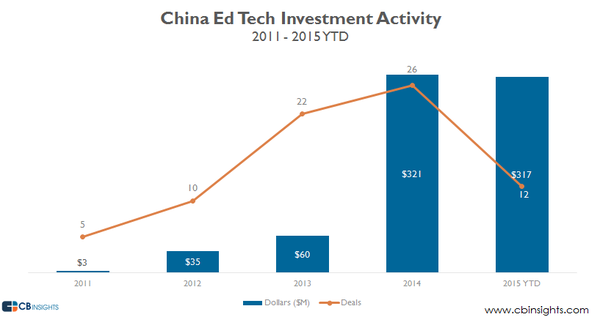 So who’s doing the buying, and what kinds of ed-tech companies in China are receiving fresh infusions of capital?

Since 2014, the largest investment in a Chinese ed-tech company has been $100 million poured into the Tutor Group, described by CB Insights as an e-learning provider specializing in training in the English language, as well as Mandarin. The investors included Alibaba Holdings, which is based in China; Temasek Holdings, an investment company affiliated with the government of Singapore; and QiMing Venture Partners, which lists offices in Beijing, Shanghai, and Hong Kong.

Another Chinese ed-tech provider, 17zuoye, has raised $100 million since 2014. The investors in it include Digital Sky Technologies, led by Russian entrepreneur Yuri Milner; as well as Temasek; H Capital; and the Shunwei Fund. According to an online report in the publication Tech In Asia, 17zuoye is an online platform focused on serving K-12 students, teachers, and parents with English/language arts and math; its name translates into English as “homework together.”

Some of the larger ed-tech investors in China, such as Sequoia Capital China, have parent companies based in the United States, but for the most part the players are “local investors” in China and other parts of the region who know the education landscape, said Mike Dempsey, a research analyst for CB Insights, in an interview.

Chinese investors are in many cases “better connected to those deals,” Dempsey observed, while many U.S. investors are still trying to build a presence there, and are likely to move cautiously until “they better understand the market and the ecosystem.”

How does ed-tech investment in China compare with that of India, a country with a surging economy that has been drawing waves of foreign investment in recent years?

For now, China dominates. Since 2014, there have been 36 equity ed-tech investments in India, worth $42 million. In China, there have been 38 deals during that time period, valued at $637 million, according to CB Insights.

In one sense, the gap between India and China in ed-tech isn’t surprising. Much of the technology-focused investment in India, as in other parts of the global market, has been concentrated in overall e-commerce, not ed-tech specifically, Dempsey noted. Investment in digital products and services in schools in India could grow, he added, as confidence in that market grows.