New research about how school systems manage their money finds that only half of administrators say their district’s funding is connected to their academic goals.

The federal Every Student Succeeds Act requires the use of evidence-based strategies and programs in efforts to turn around low-performing schools. States play a big role in setting those evidence standards, and they’re already having an impact on K-12 companies. In a webinar on Oct. 22, EdWeek Market Brief will look at how the evidence requirements are playing out in states, and among district buyers around the country. You can sign up here.

That’s just one insight from an extensive survey of 700 district-level administrators and school principals conducted by the Education Week Research Center, as part of Education Week’s new special report, “Managing the Money: Charting a Course on School Spending.”

The research—which clearly touched a nerve among these leaders—was designed to find out how they grapple with issues in school finance.

School districts are struggling with an array of financial pressures and competing demands, including tight budgets, rising pension costs, federal requirements for special education without funding to match those demands, mandated spending reviews of the worst-performing districts, and the possibility of a recession.

The report takes a close look at “the where and why” of how $700 billion in taxpayer funds gets spent every year educating 51 million public school students. Based on original reporting and research, the publication covers questions like what’s impacting rising per-pupil expenses, where budget cuts may loom, and who’s getting in the way of making spending decisions that best address student needs.

A breakdown of per-pupil spending patterns shows how the average of $13,847 per student in the U.S. is used. 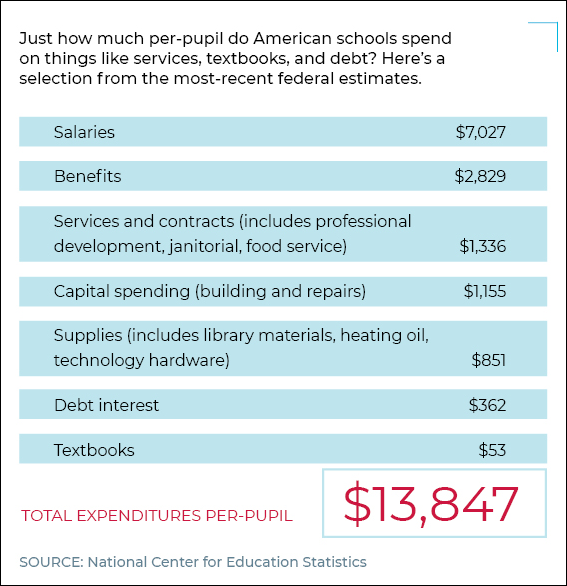 This standard “per-pupil” breakdown of funding is being revisited under new federal mandates on districts to disclose “school-by-school” spending data. Comparing how much each school spends is an approach supported by many policymakers and civil rights advocates because they say it will show where the most experienced teachers work, whether tax dollars are being distributed equitably, and how academic results relate to expenditures.

However many administrators oppose this comparison as being too easily misconstrued. Teachers with more experience command higher salaries, which largely accounts for discrepancies in school spending levels, they say.

Meanwhile, while principals are charged with managing their schools, they rarely manage the budgets for those schools. It’s a conundrum that is a frustration for many school leaders.

Money jitters are never far from the surface with school leaders, reports Daarel Burnette II, who covers education funding and finance for Education Week. Only 4 percent of survey respondents said they face no major funding challenges. The chart below demonstrates the top areas needing an infusion of funds, according to survey respondents. 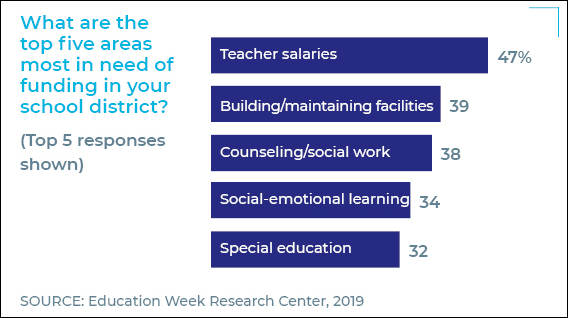 Administrators are also warning that if a recession hits, it would have severe consequences for their ability to fund programs and services— possibly even more severe than the price they paid during and after the Great Recession, a decade ago.

Education Week’s survey asked K-12 administrators which areas would be most likely to lose funding in the event of budget cuts. The chart below indicates the areas that are most vulnerable. 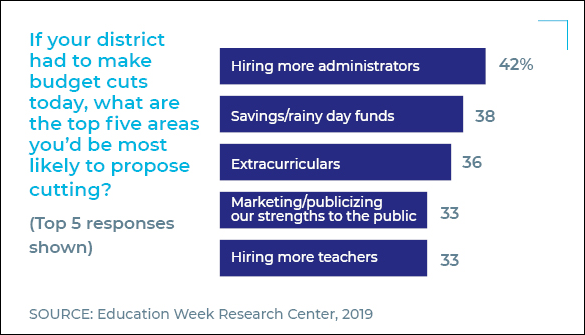 You can access the full Managing the Money report here.