The school district that has hosted more than 10,000 visitors interested in the results of its digital conversion—including President Obama—now wants to open an innovation center where ed-tech companies can test their products. 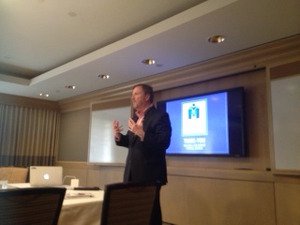 Mark Edwards, superintendent of the 6,000-student Mooresville, N.C. district, made his case for the center to investors this week during the Arizona State University/Global Silicon Valley Summit, which brought together venture capitalists, entrepreneurs, developers, and educators here.

In a meeting room at the posh Phoenician hotel, Edwards asked for $2 million to turn his vision of the Mooresville Center for Digital Innovation—which he said could be profitable within two years—into a reality.

While ed-tech leaders were looking to make deals in “Entrepreneur Alley,” Edwards made his district’s pitch to become a “test market” destination for ed-tech companies. Edwards’ appeal resulted in three potential investors asking to set up meetings about the project, he said afterwards.

Edwards distributed a 10-page plan that included a financial proforma projecting the costs of customizing the space in a renovated textile mill in Mooresville, and the anticipated income from companies that would pay to use the facilities.

“We want to solve the problem for ed-tech companies trying to figure out functionality,” Edwards said. “We’re prepared to take our entire district and wrap it into this ed-tech development center.”

The superintendent’s goal is for student and teacher intern teams to work with the ed-tech businesses on their projects, including support with:

Edwards said he has already spoken to companies that are interested in using the center, which would offer a menu of services. Businesses would “select a grade level,” and work for one semester with five students in that age group.

Mooresville’s students are accustomed to using digital resources. The district has not bought a print textbook since 2010, Edwards said.

Randy Wilhelm, CEO of Knovation, said “we tapped into the braintrust at Mooresville” to work on advances in his company’s iCurio product, which was recently updated with input from users in the district.

Bill Goodwyn, CEO of Discovery Education, said that when his company was building its digital Techbook years ago, “we didn’t have an audience except for Mark. Mooresvile students have grown up with it since Day One,” he said.

Edwards said he has always emphasized return on investment. “A lot of the time, there’s focus on ‘this is cool,’ or ‘this is fun,’ but you have to tie it back to student achievement,” he said.