In recent years, schools have shifted away from a front-of-the-classroom approach to one that puts tablets and laptops in each student’s hands. Those devices have carved into other education technology businesses, namely interactive whiteboards, which offered educators a way to enhance the front-of-the-classroom experience.

What does an education technology company do when it realizes that its technology is no longer the focal point of the classroom? That’s the question facing Jim Marshall, the newly appointed global chief executive officer of Promethean World, the interactive whiteboard company based in Alpharetta, Ga. Facing massive revenue losses since he arrived 18 months ago as head of the company’s North American business, Marshall’s succession to the recently resigned CEO Jean-Yves Charlier was being planned behind the scenes, he said in a recent interview at an education industry conference. SMART Technologies, the global leader in interactive whiteboard sales, also experienced losses recently, and its CEO resigned earlier this year. 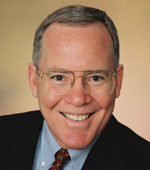 As part of Marshall’s transformation plan, Promethean’s devices—its interactive whiteboard and newly launched touchscreen table—will no longer be marketed as the center of the classroom, they will be part of an “instructional delivery system,” the software and hardware that connect all of the other software and hardware used in a classroom.

As Marshall sees it, teachers could use interactive whiteboards to present a lesson, then have them work individually on a selected lesson or in groups, with each student or group using an electronic device of the school’s choosing. Teachers can then seamlessly pick moments from group or individual instruction to bring to the front of the classroom for whole class instruction. All the while, Promethean’s software is plugged into the hardware and software the students are using and collecting and analyzing data for the teacher. Some of these instructional questions bear out in Larry Ferlazzo’s very useful recent piece for edweek.org aggregating different teachers’ interactive whiteboard thoughts.

Ultimately, the company is attempting to embrace different methods of instruction even though its products alone cannot satisfy all of those methods (my colleague Ian Quillen also recently wrote about this industry transition). In order for that plan to be fully realized, Promethean is considering making its products open source, a move that would signal an even larger transformation for the company.

While he wouldn’t commit fully to a completely open source platform, which would allow for interoperability with other open source software and for developers to create applications using the framework, Marshall said Promethean had brought on experts in the open source technology community to help advise its work going forward. (We’ve seen this movie before: Blackboard recently acquired two of its competitors that build learning management systems on the open source Moodle platform.)

Marshall and I talked about how a move to open source may be perceived, as well as the economic factors that led to this change in direction. A portion of that interview is below.

Education Week: In both Promethean’s case and in SMART’s case, the revenue numbers are going down and some of the other key financial indicators are going down. What is the biggest reason for that?

Jim Marshall: I was told by people smarter than me that it’s stimulus, silly, figure it out. We were faced with this in 2008 and we hit the wall until they had that huge chunk of money [from the American Recovery and Reinvestment Act of 2009]. Schools were right at the point of “I’m going to have to lay off 300 teachers, I’m going to have to close these buildings,” and it all got kicked down the road.

Really nothing happened except it gave them optimism for the first six months. They really didn’t start spending stuff until almost 9 to 12 months after it came. So it had a very delayed effect and it caused some strange things to happen with buying patterns and purchases. At the time same time things were changing from, “I’m putting the anvil back in the classroom with the electronic whiteboard,” to “Oh wow, there’s a new, really cheap, one-to-one device called an iPad.”
It’s a little bit of a combination of all that stuff.

EdWeek: So are you saying that some of the money just dried out?

Marshall: Yes, these smart people are telling me a third of the money is gone. How much is our business down? About that much.

EdWeek: But by the same token, Apple is selling more iPads into schools, Google is moving Chromebooks in. Money is being spent on tech.

Marshall: This stuff works in waves. The current wave now: the consumers are pro-device-in-someone’s-hands. Which is a good thing because I’m a big fan of one-to-ones.

But it’s not about one-to-ones. It’s about what we are doing in the classroom. The real holy grail of this thing is what works and what doesn’t—by kid, by curriculum, by teacher, by piece of sub-content. Unless we do that, all this stuff is a bunch of crap. Whether they have an iPad, whiteboard, doesn’t mean [anything] if this stuff is not woven together in a decent fabric.

EdWeek: Do you think that the interactive whiteboard is a technology that people still want?

Marshall: If you believe in teaching moments throughout the day, and you need whole-class instruction. If you don’t believe that, if you believe everyone is in their own digital porthole into the world, then you are in a different place.

But what I see lately is this counter-culture where there’s two camps. And I think it’s a religious conversation. Do you want to teach to the back of their heads for two hours, or do you want them in a shared-experience space?

EdWeek: So it sounds like you are in an interesting position where you’re the technology company that is trying to pitch an idea around a less technology-centric classroom?

Marshall: That’s correct. I’d much rather cannibalize myself faster than somebody else can do it. I’d rather eat my own young than have anybody else do it. I believe in all three modalities.

EdWeek: Would you ever consider moving to an open source platform?

EdWeek: And what do you see that looking like?

Marshall: That’s a great question. We’re still working on that. But our philosophy is certainly open-object, possibly open source. A plug-and-play environment.

EdWeek: That’s a close community there, the open source community. Do you feel as though Promethean will be embraced?

Marshall: We’re going to take steps to make sure we are.

EdWeek: When Blackboard made that move, there were people in that community who said, “All of a sudden you’re going to embrace those communities you tried to shut off?” Entering that space isn’t as simple as opening up your technology.

Marshall: That’s right. And the great thing about the company is: along with the industry, we are going to change too. Internally we are embracing all sorts of things we haven’t embraced before.

EdWeek: When do you think that platform might be done?

Marshall: We’re going to have major components of this before the next school year.
It will be open. We have to decide what is best for the community. Should it be open source or open object? It will not be proprietary, it will not be closed. We will bring some smart people in from open source companies to figure out how to do that. That’s not an acquired skill.

(This post has been changed to clarify how former Promethean CEO Jean-Yves Charlier left the company.)