The number of international private schools offering instruction primarily in English continues to surge worldwide, growing by more than 6 percent over the most recent year, as families’ incomes rise and they try to prepare their children for college abroad.

There are now more than 9,605 “English-medium” private schools globally, and the compound annual growth rate of those institutions has risen by 5.6 over the past five years, according to a new report by ISC Research, which tracks the sector.

The United Arab Emirates is the country with the most students served by those schools, with more than 620,000, a summary of the report explained. An estimated 80 percent of the UAE’s workforce are expatriates, and demand for private school education in the oil-rich Persian Gulf nation is high.

China has the next-highest enrollment, with more than 489,000 students in international private schools. Saudi Arabia and India are also huge markets. See the full list from ISC, below: 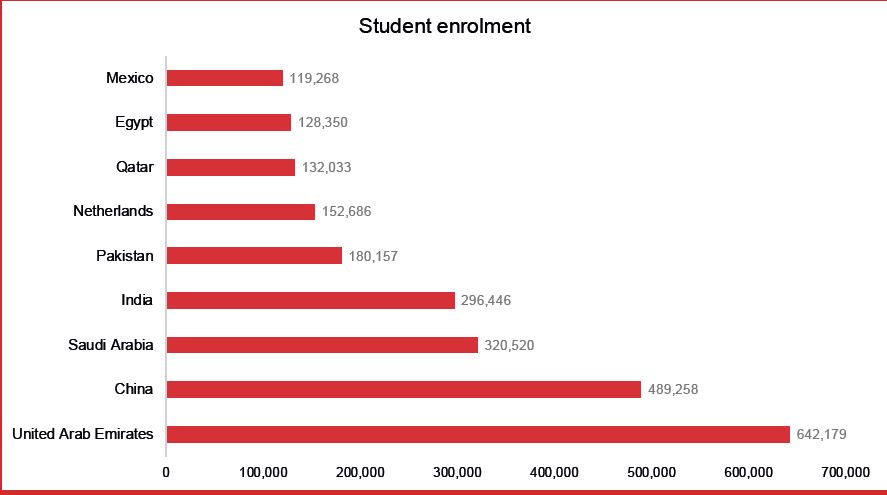 Many cities in the Middle East have seen huge growth in enrollment in international private schools over the past year, dating back to May of 2017. Student enrollment in Abu Dhabi, in the UAE, for instance, grew by nearly 17,000 to 276,000 during that time. But major metro areas outside the region also have seen a spike in demand, such as Mexico City, where enrollment grew by 22 percent, or 6 percent.

Despite the rapid growth in demand in many Middle Eastern and South Asia countries, the market conditions in some of those nations has actually held private school enrollment in check somewhat, ISC says.

Many expatriates working in the oil and gas industry and other sectors have returned home and those who have remained abroad have seen packages that supported their children’s private school education cut down, the research group said. That has led many expatriates to seek more affordable private schools.

Visit EdWeek Market Brief’s LinkedIn page to share your thoughts about the most pressing issues facing education companies. And check out EdWeek Market Brief, a service that provides companies doing business with schools with news, analysis, and original data on the needs and priorities of K-12 systems.

“Although the children of the highest-paid expatriates and wealthy locals are filling some of the high-fee premium school places, most enrollment demand is now focused on the mid-price international schools that are affordable to the majority of professional expatriates and more affluent local families,” ISC’s report says. “This shift in the market is expected to continue.”

In terms of where enrollment growth is headed, 18 new schools are slated to open in the UAE in 2018-2019, and 17 are expected to open in China, according to ISC.

And demand for bilingual private schools in the international market is rising. The report from ISC  Research finds that the number of those schools has spiked dramatically, from 1,669 in 2010 to 3,167 worldwide today.

“With so much choice, it can be challenging for parents to select an international school for their child,” ISC said in its report “An increasing number of schools are seeking accreditation as a route to differentiation and quality assurance.”