Funding for ed-tech companies serving preK-12 around the world declined by nearly 50 percent last year compared to 2018, according to a report released earlier this month by Metaari, a quantitative research firm.

That’s despite the fact that 2019 set a new record for all learning technology segments—consumers, corporate, higher education and preK-12—with $18.66 billion invested globally, according to the company’s research report.

Analyst Sam Adkins, CEO and chief researcher at Metaari, wrote that this decline in preK-12 investments represents a surprising pattern. EdWeek Market Brief asked him why the dramatic change occurred, and he came up with a number of possible theories, while cautioning that it’s impossible to know for sure.

“I track investment and the one consistent thing I have seen over the decades is that you can’t draw conclusions or make predictions based on any given year,” said Adkins in an emailed response to questions about why there was such a dip in the academic market globally. 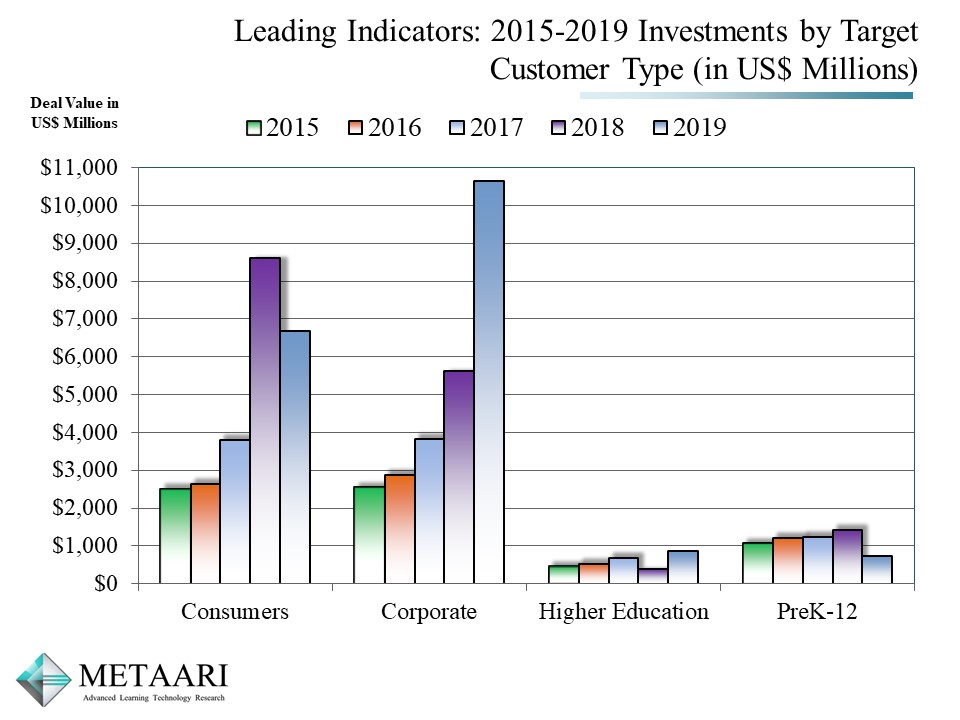 Looking across segments, investor enthusiasm elsewhere might be one reason. “It may not be an aversion to preK-12 but rather a ‘grass is greener’ story,” Adkins said in the email. The corporate segment appears to be attracting investor interest because of “the revenues being generated by startups selling next-generation products” there, Adkins said.

Another possibility is that it is a “product substitution side effect as investors migrate away from legacy products,” Adkins said. In preK-12 and higher education, “things change very slowly…and tech adoption is still traditional rather than disruptive.” Schools and universities might keep their ed-tech products longer, rather than introducing new ones.

Softness in global markets is another potential contributor. Among the many factors inhibiting preK-12 growth across the globe is “the general weakness of Latin American economies and the draconian regulations in China,” said Adkins. “It is very hard for ed-tech [companies] to gain traction in China right now. Even the domestic giants are investing outside of the country.”