International private schools—a surging market for companies—have a big appetite for digital content, but many of them struggle to weave those resources into current lessons and use them effectively, a new survey finds.

Discussed today at the Bett ed-tech conference being held here, the survey results show international schools grappling with some of the same tensions that frustrate U.S. public schools trying to make use of ed-tech.

The survey, which focused on the demand for and use of digital resources in global private schools, was the first of its kind conducted by the International Education Research Panel, a joint effort of ISC Research and C3 Education.

The ISC is a British company that conducts research on international private schools; C3 conducts market research and does business development focused on the United Kingdom.

Basic internet connectivity, the survey found, is not regarded as a major worry among many international private schools—though not surprisingly, the needs vary greatly by region.

Overall, 19 percent of international schools said they lack necessary internet connections, the researchers found. But conditions were worse in Africa and Southeast Asia, where only about two-thirds of respondents from private schools in each region claimed to have the web access they need.

At the same time, lack of connectivity was not those schools’ most fearsome hurdle in using digital content, the research found. A bigger portion of respondents, 33 percent, said insufficient training to use online resources was the chief barrier.

Similarly, when asked to identify the main culprit limiting their use of digital content and applications, 42 percent of international school officials pointed to not having the time to integrate that content into their current lessons.

That obstacle was regarded as more daunting than other factors, such as budget shortfalls, or frustrations with the compatibility of content with learning management systems.

See the graphic from ISC Research, below: 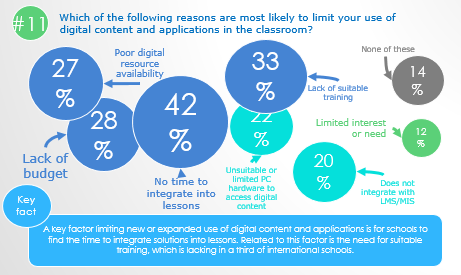 International schools, as defined by the researchers, are those that deliver curriculum to students ages 3-18 either entirely or partly in English, in nations where English is not the official language or merely one of them.

All of the schools are private, says ISC, though their costs range enormously. Roughly 80 percent of the students attending those schools today are locals, while just 20 percent are expatriates, according to the researchers.

Portions of the survey results were presented on one platform in the sprawling Bett exhibit hall Thursday by Diane Glass, director of business for ISC Research, who noted that demand for international private schools is rapidly growing.

In 2000, the global “English medium” education market—basically, where subjects are taught in English—was comprised of 2,584 schools, serving under 1 million students. Today, there are 8,506 schools with 4.5 million students enrolled, she said.

Growth will continue, Glass predicted. By 2026, the number of international schools is likely to have more than doubled, to nearly 17,000, she said.

The private schools are counting on digital content to serve several purposes at once, the survey suggests.

Asked where they have the greatest need for content, 60 percent of international school officials surveyed said “lesson delivery” is their top priority, followed by 47 percent pointing to “personalized learning”—an interest of many U.S. educators. Formative assessment and lesson-planning, both at 29 percent, also were seen as digital content priorities, the survey found.

Nearly 7,000 English-medium schools were contacted through the survey, and 836 responded, for a 9.7 percent response rate. The margin of error was 3 percent. The respondents included a mix of school employees, including senior leadership and educators.

The full survey results are available at a cost from ISC.