Nearly two-thirds of Michigan’s public school districts are hiring private contractors to handle either janitorial work, transportation, or food service, and that number has risen over the last year, according to a new report.

The findings, published by the Mackinac Center for Public Policy, offer a glimpse at one of the strategies being tried by school systems that are desperate to cut costs, as their state, and many of its communities, attempt to persist through years of bleak economic conditions.

The center, a think tank based in Midland, Mich., that describes itself as backing free-market economic principles, found that 66 percent of Michigan’s 545 districts contracted out for at least one of the three main services studied by the authors.

“Every district is trying to find ways to save money and get more resources into the classroom,” said James H. Hohman, the center’s assistant director of fiscal policy, in an interview. Districts’ interest in hiring private-sector janitorial services, he said, “shows no signs of abating.”

The proportion of districts contracting out for transportation services, meanwhile, rose to 21 percent from 16 percent the previous year.

The pace of growth wasn’t as strong in food service, though the percentage of private contracting in that area climbed to 36.5 percent from 34.6 percent.

Districts often face agonizing decisions in choosing whether to replace public workers with those employed by private companies, an issue we examined recently in an Education Week special report on privatization. In some cases, those decisions result in district employees losing jobs. In others, school workers can be hired back by the private vendors at lower salaries, or in different roles. Critics of privatizing services in K-12 systems say the practice results in less district oversight and poorer quality work. They also say claims of cost-savings tend to be exaggerated, particularly if private-sector services don’t match those that had been provided in-house.

The types of private sector companies moving into Michigan districts can vary greatly by sector, Hohman said. In the food-service industry, which tends to be highly regulated, many of the private sector operators are larger vendors, though some mom-and-pop local restaurants get tapped for duty. Custodial and transportation services tend to be handled by a mix of large and small companies, he said.

The report is based on survey of all Michigan districts, Mackinac officials say. The center conducted the survey in 2001, 2003, and then  annually since 2005. 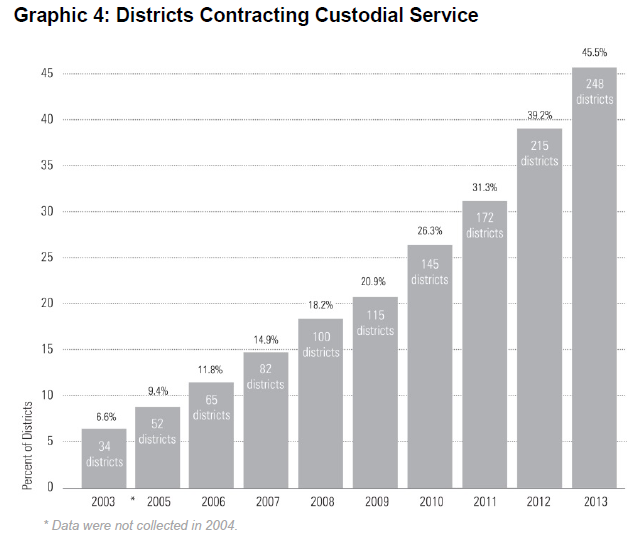