K-12 curriculum software and subscription spending grew at a higher rate than any other technology budget area for school districts last school year, as their IT budgets mostly increased from the previous school year.

In a survey of 170 district technology leaders by the Consortium for School Networking, 62 percent of participants reported their schools’ funding for curricular software/subscriptions rose between the 2019-2020 and 2020-2021 school years, with 56 percent also noting a spike in cybersecurity investment.

Another 56 percent of respondents said their district’s overall IT budget expanded, with 12 percent citing a “major” increase, according to a summary of the report. 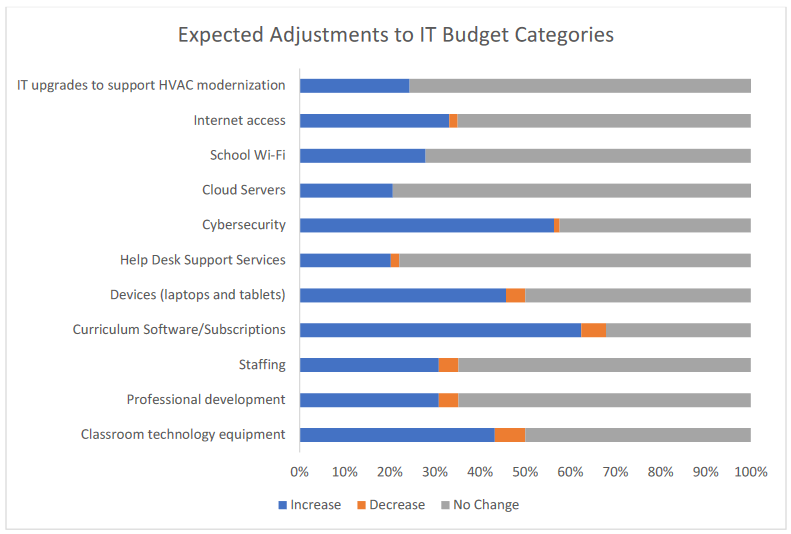 “In a situation where even well-funded corporations in the private sector struggle to address cybersecurity issues, poorly funded districts are at a disadvantage,” CoSN said. “One respondent called the need for more cybersecurity funding as ‘desperate.’”

Cybersecurity has been a focus area for CoSN, which is one of several organizations that endorsed the Enhancing K-12 Cybersecurity Act. That bill would set a path for the federal government to guide best practices for K-12 cybersecurity and provide cybersecurity grants to schools that could benefit certain education companies.

Congressional lawmakers have not acted to advance the bill.

In addition to greater curricular software and cybersecurity spending, the majority of those surveyed also noted new technology initiatives, with 64 percent saying that they added classroom technology to support simultaneous hybrid learning, such as rotating cameras, microphones and speakers; and 60 percent reporting that they now offer a remote-only instruction option.

Further, 37 percent of tech chiefs said they added “district-wide student-facing Cloud-based applications,” such as learning management systems, to their digital ecosystems, and 23 percent of districts gave devices or extra monitors to educators for home use.

How has the pandemic, and the often jarring shift it forced school district to make into remote learning, altered what K-12 systems want from companies and their products? EdWeek Market Brief recently explored this topic in a webinar. It can be viewed on-demand here.

Only 2 percent of participants reported not supporting new IT initiatives or existing IT efforts that weren’t already supported pre-pandemic.

Almost all district leaders are looking to the federal government for technology funding help.

About three-quarters of those questioned plan to request support from the Federal Communications Commission’s Emergency Connectivity Fund for Wi-Fi hot spots, while 90 percent of respondents said infusions provided through three stimulus bills enacted over the last 17 months significantly helped remote-learning or related IT initiatives in their districts during the pandemic. (See EdWeek Market Brief’s recent, nationwide survey showing how district officials plan to spend the new, $7 billion connectivity fund overseen by the FCC.)

The three COVID stimulus packages heaped an overall $189.5 billion financial windfall on U.S. K-12 schools. Districts have until Sept. 30, 2024, to commit the last bit of that money.

Compared with the CoSN review, a recent EdWeek Market Brief survey found a slightly lower percentage – 62 percent – of 280 district administrators interviewed, planned to seek ECF reimbursement for Wi-Fi hot spots for home use. However, the CoSN survey did not specify that the hot spots sought for reimbursement pertained only to home use.

“There is a marked shift in how school district IT leaders are preparing for this fall, compared to the back-to-school survey results from last year,” CoSN CEO Keith Krueger said in a statement. “While the federal government delivered critical funding when school districts needed it most, we must now invest in cybersecurity and ensure sustainable, secure and equitable home broadband access for students and educators into the future.”

Graph provided with permission from the Consortium for School Networking