State spending on K-12 education rose over the past year despite lackluster tax collections, as budgets continue to tick upward from the abyss of the Great Recession.

Funding in the states for education increased by 4 percent in fiscal 2017, a bump from 2.9 percent a year before, according to a report released today by the National Association of State Budget Officers.

“K-12 is one of the last areas states want to cut. They see the value of it,” said Brian Sigritz, the association’s director of state fiscal studies, in an interview.

The boost in spending, he said, reflects “modest growth” yet is a relatively “strong number not just because of the increase, but because it continues a trend we’ve seen since the end of the Great Recession.”

In another measure included in the report, states’ median general fund spending for K-12 education rose by 3.6 percent from fiscal 2016 to 2017, roughly the same amount it did the previous year.

For the vast majority of states, fiscal 2017 covers the period from July 2016 to June of this year. In the information it collects, NASBO does not specifically ask states to include or exclude pre-kindergarten spending in their K-12 totals, Sigritz said. It is likely that many states include pre-K, he said.

States spent a total of $385 billion on K-12 education in fiscal 2017. School spending continues to represent the biggest chunk of state general fund spending, at 36 percent, according to fiscal 2016 estimates. Medicaid took up the second-largest share, at 20 percent, followed by higher education at 10 percent.

K-12 spending makes up 19 percent of total state expenditures–a combination of state and federal sources. See the chart from NASBO, below: 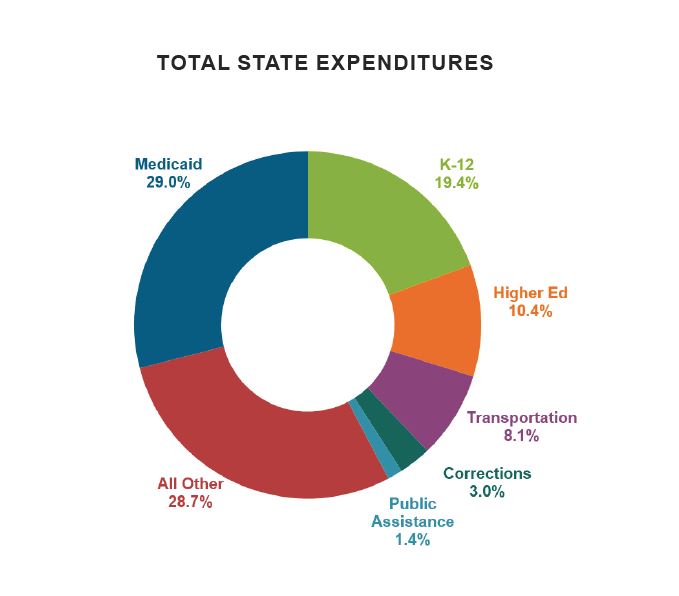 Some of the new money states are pouring into education is going to raising teacher pay, NASBO said. In a few cases, states are raising overall K-12 funding–and the equity of spending across districts–in response to court mandates. Early childhood education is also receiving an infusion in some states, the association said.

To the extent that individual states prioritized K-12, many of them were not helped by weak tax revenues filling their coffers.

State general fund revenues grew by just 2.2 percent in fiscal 2017, following 1.8 percent growth in fiscal 2016. Over three of the past four years, state revenues have grown only incrementally, or declined, according to the association.

Still Climbing Out of the Great Recession

The Great Recession officially lasted 18 months and ended in mid-2009. But it exacted a severe toll on budgets in education and other areas for years afterward, as state and local economies withered and tax bases collapsed.

On Nov. 17 EdWeek Market Brief will host a webinar offering an in-depth discussion of how companies can conquer some of the biggest challenges they face in breaking into foreign school markets. Among providers’ biggest needs: finding reliable “resellers” and other partners in those markets, and knowing when to pivot and move to a different strategy in that country. Sign up here to join the conversation.

Congress, at the urging of the Obama administration, sought to ease the pain by providing federal stimulus aid–most notably a $787 billion recovery package in 2009 that included $100 billion for education.

The share of state spending consumed by elementary and secondary education has fallen from 22 percent in fiscal 2008 to a little more than 19 percent in 2017.

That’s not because K-12 spending has decreased, but because Medicaid is consuming a larger share of the pie, notes NASBO. Medicaid has risen as a portion of total state spending from 20.5 percent in fiscal 2008 to 29 percent in 2017, a increase that can be partly attributed to the growth of coverage through the Affordable Care Act.

Yet despite those costs, “governors and legislators are continuing to [make] elementary and secondary education a high priority,” Hicks said.

NASBO’s overall estimates of state spending were skewed slightly by a budget impasse last year in Illinois, which depressed national spending estimates last year and inflated them slightly this year.

Total state spending across all areas of government, including education, rose by 4.6 percent in fiscal 2017, when Illinois’ numbers were excluded. There was growth across all eight geographic regions broken out by NASBO.

In K-12 education, spending rose in the majority of individual states, NASBO found.

“Overall, you see almost all positives,” Sigritz “There’s less variation in K-12 than you would see in some other program areas.”