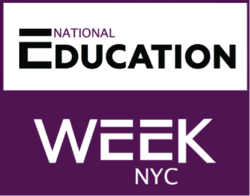 When I walked into the Philadelphia convention center last year for ISTE, I found myself taken aback by the sheer number of people hustling and bustling about. It was easy to get lost in the crowd as opposed to the National Education Week event where the “big fish, small pond” benefit was in full effect. Moreover, the National Ed Week event launched a very effective initiative at the conference: A group of 20 or so education entrepreneurs were featured in an “innovation gallery.” Interested investors and potential collaborators could view a company and book a meeting in advance of the conference. In doing so, NEW removed some of the randomness of networking and facilitated a structured way for ventures to land meetings with stakeholders before the conference even took place. Of course, EdConnective and others benefitted from sporadic networking at the conference as well. However, that simple, “book meetings in advance” feature proved to be extremely valuable.

In conjunction with the conference, NYU’s EDGE ed-tech accelerator made its debut. Founded by ed-tech veterans Don Burton and Jonathan Harber, EDGE is another accelerator entering what is quickly becoming a very robust ed-tech support ecosystem. This is good news for budding ed-tech entrepreneurs who can now seek support from over 200 ed-tech accelerators worldwide. So what makes EDGE different? Their website mentions a number of variables, but what stood out to me is the stage of development of the average company in their accelerator. Many of the EDGE companies have already served over 100,000 users across hundreds of U.S. schools, which is a lot! Some catalyst programs start with companies at the idea stage, product stage, or at very early revenue, but EDGE seems to take ed-tech ventures that are already rather successful and tremendously de-risked.