I realized this week that I might be suffering from the Spring Break Blues. 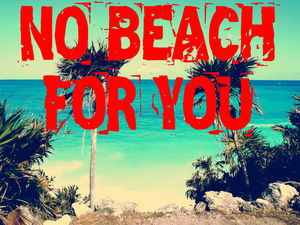 As someone who attended school in America, I grew up knowing and loving spring break and being off from school.

Then as a teacher, I realized that spring break might actually be for the adults’ benefit as well as the student.

But now, as someone working at a business in the education sector, my feelings have turned from love to loathe.

First, there is the fact that working at a small startup, there is no such thing as a spring break. There’s barely even a thing called vacation.

Maybe this is a personal choice around time prioritization, but the fact of the matter is that I don’t feel I can afford a spring break. We’re just coming into the prime season for us to engage new partners for next year. Mai Tais in Maui just doesn’t seem to mix well with that need.

Second, there’s all my friends, many of whom still work in schools, who are posting to various social networks about their spring break plans. Some of them are literally packing their bags this week to head to Maui.

But third, and worst of all, I’ve started to loathe spring break because many of the people we’re trying to engage for future business are themselves leaving on a jet plane.

Half of them seem to be gone this week. Half of them might be gone next week. And half of them are not replying to our emails because they’re busy with all that stuff that happens before they’re gone.

At least I’m beating the Spring Break Blues by soaking up all the sunshine here in San Francisco. Maybe I’ll go on a bike ride across the red bridge and then around Paradise. Or maybe I’ll walk around in the park with need for only a light sweater.

Yes, I’m playing the “I live in the sunshine vortex and it’s sunny and warmish nearly every day here in San Francisco” card right now.