A judge has ruled in favor of the Federal Trade Commission in a case brought against Amazon alleging that the online retailer has improperly billed parents and other users of apps for charges incurred by children.

The case originates from a complaint brought by the FTC in 2014, in which the consumer-focused agency pointed to Amazon’s collection of “in-app charges” associated with the selection of apps and games that children like to play, from its app stores.

Amazon failed to obtain parents’ and other users’ informed consent for those charges, the FTC said, despite widespread consumer complaints. User activities within some apps carry costs that can range from 99 cents to $99.99, according to the new ruling, issued this week.

In his decision, federal Judge John C. Coughenour of the Western District Court of Washington state granted the FTC’s motion for summary judgment against Amazon, ruling that they are liable for violating the FTC Act through their app billing practices. His ruling allows the agency’s pursuit of monetary penalties to go forward.

Amazon has recently made significant steps into the K-12 market. The company was hired this year by the New York City schools to create a comprehensive online shopping source for e-books and other digital content.

And, as my colleague Michele Molnar reported earlier this year, Amazon officials revealed they are working on a new platform that will allow schools to upload, manage, and share “open” education resources, through a process not unlike shopping on the retailer’s website.

In the case brought by the FTC, Amazon had argued that consumers could have avoided charges, in part because they are warned about charges under “terms of use” and app-description pages. The company also noted that parental controls could also have been activated, and that users who complained frequently secured refunds for in-app buys.

But Coughenour did not buy that rationale.

“[I]t is unreasonable to expect customers to be familiar with the potential to accrue in-app purchases while using apps labeled as “FREE,” the judge wrote in one section of his ruling. “Many of Amazon’s arguments improperly assume a familiarity with in-app purchases on the part of consumers.”

The judge noted that for customers to grasp the meaning of one of Amazon’s warnings, they would have to wade through a long, staid descriptor laid out in the same color and font. He included an image of the language in his ruling: 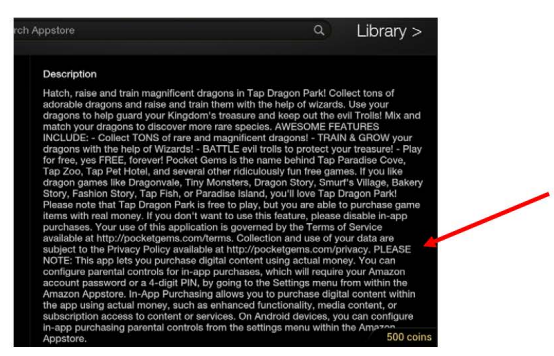 In a statement, FTC Chairwoman Edith Ramirez said the agency looks forward to the case moving ahead and the government “making a case for full refunds to consumers as a result of Amazon’s actions.”

Amazon officials have not yet responded to a request for comment.

The FTC noted in its statement that it has reached settlements with Apple and Google in cases focused on unauthorized in-app charges incurred by children. Those cases resulted in the companies facing requirements to refund consumers for those costs, the agency said, for an amount cumulatively worth more than $50 million.