Levels of education and income in U.S. households carve a digital divide of up to 47 percentage points separating those who own computers and have connectivity, and those who don’t, according to a new U.S. Census Bureau report.

More education and greater income correlate with an increased likelihood of owning a computer and subscribing to an Internet service provider, according to the bureau’s findings from the American Community Survey, which samples a small percentage of the population every year, giving communities information to plan investments and services.

While that might be an expected result, the size of the divide among groups is “noteworthy,” according to Thom File, a Census Bureau sociologist and the report’s author. Smaller divides were seen when tracking households by age, race, and region.

More than any other variables, education and income are predictors of whether a household will have Internet. In households where a resident has a bachelor’s degree or higher, 96 percent own computers, with 90 percent using high-speed Internet connections at home, according to the agency’s research. In households where no one has a high school diploma, computer ownership was 56 percent and Internet usage 43 percent.

“Although we didn’t look specifically at families with children, the report does outline the persistence of certain digital divides across the country,” said File.

As of 2013, about 84 percent of U.S. households owned computers, and nearly eight in 10 Americans have access to high-speed Internet, according to the bureau’s findings.

The survey, which was released earlier this month, will be used by the federal government to measure and monitor the development of broadband networks nationwide, and to allocate resources intended to increase access to broadband technologies, according to the report.

State educational and school district leaders might find future versions of this survey particularly useful, according to  File.

“As schoolwork grows increasingly digital in nature, educators can use these data to understand the types of access that students have, particularly if they’re completing coursework at home using the Internet,” he said. Previous versions of this survey delivered statistics only on a statewide level. This year, it gauged computer ownership and Internet access in households located in metropolitan areas with at least 65,000 residents. 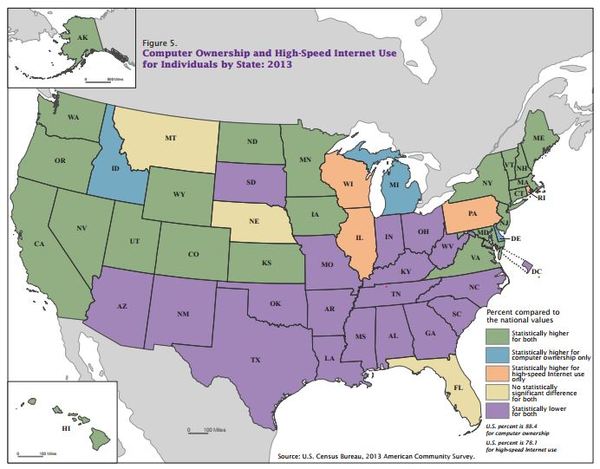 A snapshot of states doesn’t tell the whole story, though. “Look at Washington, Florida, Illinois, and Claifornia, and you see a very nuanced, diverse picture within their states,” File said. In California, for instance, Napa, San Francisco, and San Jose all report higher computer and connectivity rates.

However, in the central California metropolitan areas of Bakersfield, Fresno and Hanford, the rates are generally 10 to 15 percentage points lower.

As the survey becomes more geographically specific, the census bureau plans to produce estimates for even lower levels of geography, such as counties and school districts. This would allow educators to “assess the resources of their students in more detailed ways,” said File.

Source: Computer and Internet Use in the United States: 2013 Report