The number of deals in the ed-tech sector picked up in the first quarter of 2017, though the pace of activity remains well below its lofty peak of a few years ago, a new analysis finds.

There were 131 total ed-tech deals in the first quarter—up from 100 in the fourth quarter of 2016—and the deals were valued at $545 million, according to CB Insights, a market research company. The dollar value of the deals in quarter one still lagged below the three most recent quarters last year, all of which hit at least $624 million.

More than 52 percent of the deals in the first quarter were made in the seed or angel stage of investment, said William Altman, a tech industry analyst at CB Insights, in an email to Marketplace K-12. The focus on those types of deals is not unusual: Roughly the same portion of ed-tech deals have been focused on those early-stage investments since 2012, as the analysis points out.

Why the upswing in investment so far in 2017?  Altman speculated that the success of some players in the education market over the past year might have emboldened new investment activity.

The number of deals in the first quarter still falls short of the zenith of the past few years, during 2015, when 148 were struck. And the value of the deals was well short of the recent high point of $1.345 billion, also during 2015: 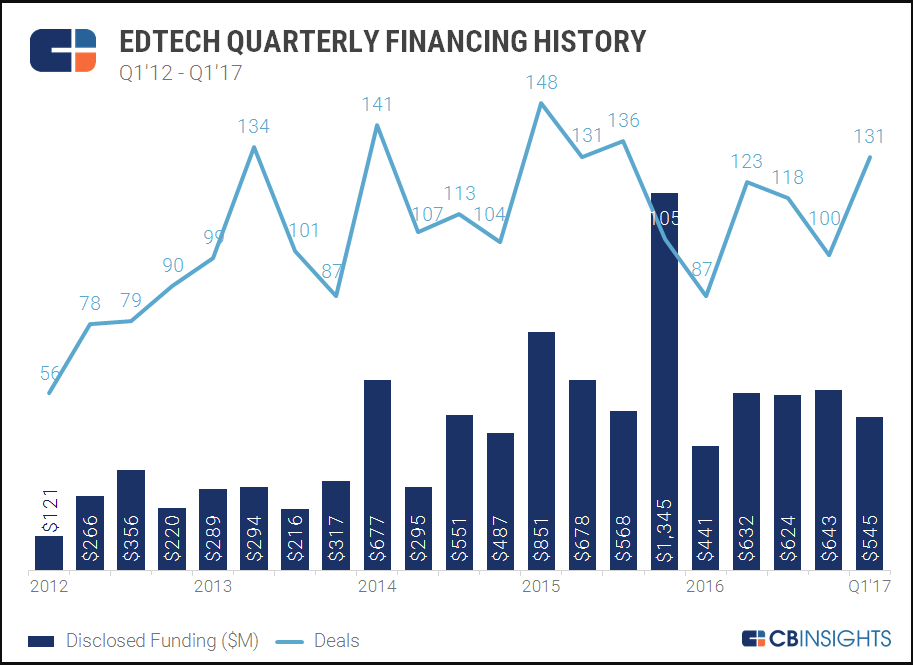 At least some of the biggest ed-tech deals in quarter one occurred in the K-12 space, as opposed to higher education, Altman said. The third-largest deal was China investment firm CDH Education’s $35 million purchase of a stake in Ednovation, a Singapore-based provider of preschool-focused technology.

The biggest share of ed-tech deals, by far, occurred in the United States. Here’s a full breakdown of the activity in different countries (those that represented at least 3 percent of the dealmaking) as provided by Altman:

3 thoughts on “So Far in 2017, Pace of Investment Into Ed Tech Bouncing Back”