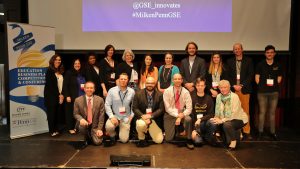 Education startup companies focused on interactive coding, overcoming youth trauma, and helping with dyslexia were among the winners of $140,000 in prize money to build their businesses at a Philadelphia entrepreneurship competition sponsored by the University of Pennsylvania’s Graduate School of Education.

This year the competition saw a greater number of applicants, as well as a “higher quality of competition,” said Barbara “Bobbi” Kurshan, the executive director of academic innovation at the Penn Graduate School of Education.

“In general, the bar was set higher,” she said in an interview “My mantra has been ‘Don’t show me an app. Show me a company.’”

Kurshan said she also saw an uptick in the number of companies addressing issues around mindfulness and resiliency in students, an area highlighted by University of Pennsylvania psychology professor Angela Duckworth in her book “Grit: The Power and Passion of Perseverance.”

Winners received cash awards as well as a chance to join the university’s Education Design Studio, which helps mentor companies and acts both as a startup incubator and a seed fund. The big winner of the day was Tassl LLC, a Philadelphia-based company that created an alumni-engagement technology platform for institutions of higher education, which garnered $60,000 in the competition.

Pivot Interactives, SBC, an Afton, Minn.-based company which creates interactive videos for science learning won $20,000. Peter Bohacek, the company co-founder and CEO who is also a 12th grade physics teacher, said Pivot videos have built-in measurement tools to allow students to analyze “events” like a paddleboarding excursion, an explosion, or a car skidding on ice.

Bohacek said the money and support from the Milken-Penn competition helps to “validate” his company’s new venture. The money will go to develop new software and to expand videos into the areas of chemistry and biology, he said. The design studio support will also be significant, he said.

The Pivot technology, he said, “is a really good idea and we’ve seen it work in our own classrooms. But we’re educators and we don’t have business experience. It’s really valuable for us to meet other people with that experience.”

Communication APPtitude, of Towson, Md., won $10,000 for its use of digital technology to teach literacy through visual strategies to students at all levels. Deena Seifert, company co-founder and a speech language pathologist, said the company recently received several awards including $100,000 from the Maryland Technology Development Corporation to build their pro web-based tool. The company will use the Milken-Penn money for marketing and to add content to the site, Seifert said.

Participating in business plan competitions forces startups to hone their vision, Seifert said. They “make you formalize your business plan, your numbers and finances, and the milestones you need to hit,” she said. “It’s been great to help us learn the business side.”

Kurshan said she’s seeing a higher level of quality among entrants in part because it’s getting more difficult for startups to raise money.

“Those people who have ideas don’t get a network to build them unless it’s something good,” she said. “Funders are being much more critical.”

For a full list of winners, check out the Milken-Penn press release here.