This year’s election appears to offer mixed results for the nation’s school districts–and for the companies and organizations that serve them–judging from results that are still rolling in.

The overwhelming amount of attention has focused on the U.S. presidential race, where Democrat Joe Biden and incumbent Republican Donald Trump were locked in a process that could take days to resolve because of the narrow vote margin and the slow pace of counting in many vote-rich precincts in key states.

But there were also many key elections and ballot measures in play at the state level, with big implications for K-12 policy and funding.

Check back here for updates as they come in.

A White House Race That Could Sway K-12 Budgets

The battle to control the presidency appears to come down to a few key states, including Pennsylvania, Michigan, Wisconsin, North Carolina, and Georgia.

Biden appeared to notch a key victory on the electoral college map when he flipped Arizona from GOP to Democratic control. If he were to win some combination of Pennsylvania and another state in the upper Midwest, it would appear to give him the 270 electoral college votes necessary to win.

Trump appeared to be poised to contest the vote-counting process in those states, as Democrats make gains in tallies conducted overnight and today. The Republican incumbent made false claims overnight about election fraud and vowed to challenge the results in court. 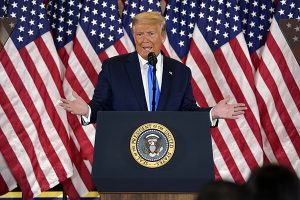 If elected, Biden has vowed to greatly expand funding for schools–which has risen under Trump–by channeling new money into Title I and other major federal funding sources. (See Brian Bradley’s pre-election breakdown of the issues at stake.)

Education advocates also see the potential for new federal funding for after-school programs and other needs, if Biden wins.

The party in control of the White House also controls the leadership of the Federal Communications Commission. Ed-tech groups believe a Biden victory would lead to more funding and policy changes that are more favorable to creating new flexibility with the E-rate program, which supports internet connectivity in schools.

But Republicans appear to have fought back challenges in several key races, including Iowa and North Carolina. Some analysts on Wednesday were predicting the results would lead to a 50-50 split in the Senate, raising fears of an even greater degree of gridlock and partisan rancor than exists now.

Many school groups are hoping that Congress will eventually deliver billions of dollars in additional emergency aid for school districts, which have been coping with new financial costs and the continued likelihood of declining revenues caused by the pandemic.

A total of 6,000 legislative seats in 44 states were up for election on Tuesday. State legislatures and governors typically play a key role in shaping K-12 policy and spending, since states contribute a much bigger share of funding to schools than does the federal government.

[Updated: According to the National Conference of State Legislatures, New Hampshire was the only state legislature where a shift in party control was expected as of the morning of Nov. 5, from Democrat to Republican. Arizona is awaiting vote totals to discern whether Republicans will maintain control of that legislature. It appears that Minnesota will keep its distinction as the only state with a split-party legislature.

It also looks like Republicans will retain control of the statehouse in Michigan, where Democrats had expected to mount a fierce challenge to overtake legislative control. Colorado will add a few more Democrat seats to its Democrat-controlled legislature, and EdWeek Market Brief continues to monitor vote totals for state legislative races in Nevada, where it is possible Democrats will gain a legislative supermajority, which enables the majority party to pass legislation will less resistance from the minority party.

Education advocates are hoping to channel new funding into K-12 through ballot measures, which would most likely have an impact on districts’ ability to spend on new products and services.

As of Thursday morning, some of those high-profile measures were on their way to victory, while others were on the brink of defeat.]

Check back on this post as election results are confirmed in the days ahead.