And that demand is making Brazil an increasingly attractive landscape for investors and companies seeking to serve the market, a new report argues.

The appetite for private school education is being fueled by many of the same factors at work in other major economies, says L.E.K. Consulting, the authors of the report. Those factors include rising incomes and a growing middle class, demand for English language instruction, and dissatisfaction with government-run schools.

Brazil has the world’s ninth-largest economy and is its sixth most populous nation, with 212 million people.

From the early 1980s through 2012, Brazil’s middle class grew from representing 15 percent of the population to more than 30 percent, according to the World Bank. Some of the world’s fastest-developing countries, such as China and India, also have seen their middle class populations soar, which has fueled demand from parents for higher-quality education that will put their children on the path to postsecondary study.

As incomes have climbed in Brazil, so has demand for English-language training. Bilingual schools are the fastest-growing segment of the Brazilian private education market, L.E.K. says. The report specifically cites the growth of the Maple Bear schools, a Canadian-run organization, as one of the organizations with a big presence in the country. The biggest challenge for bilingual schools is finding qualified teachers, the researchers say.

Overall, private schools currently account for less than 20 percent of K-12 student enrollment in Brazil, the report says. The government has been broadly supportive of private school education, and there are no direct restrictions on their tuition costs.

See the country-by-country breakdown of public vs. private school enrollment in Latin America, as provided by L.E.K.: 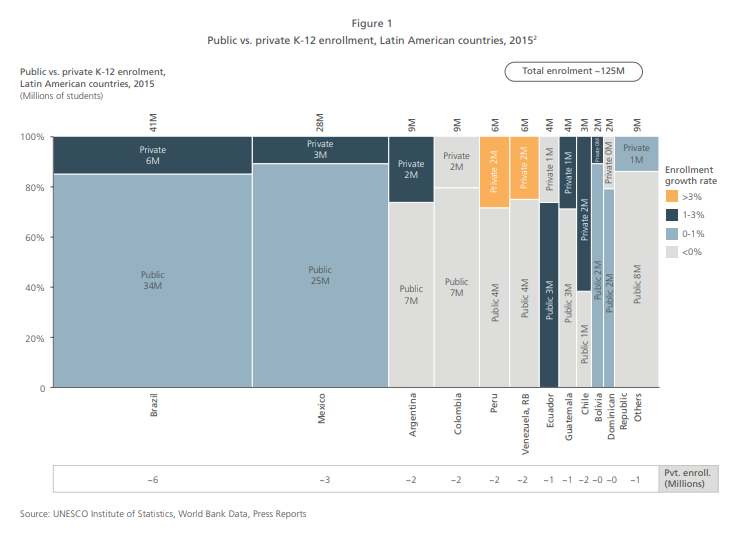 Many of the private schools with the strongest growth in recent years are those that have sound records and reputations among parents for academic rigor, says L.E.K. Those demanding private schools have boosted their enrollment by about 10 percent between 2014 and 2017.

Many ‘Mom and Pop’ Providers

Within Brazil’s private schools, there’s also a burgeoning demand for “personalized learning,” the appealing, if vague, educational strategy that has become a fixture in school plans and K-12 company marketing pitches across the United States.

Some Brazilian schools have already sought to ramp up personalized education for students, the report says. Lack of technology infrastructure and teacher tech training has long been seen as barrier to those ambitions.

The authors of the report believe this barrier can be overcome in Brazil through “platforms that bridge the gap between the classroom and the tools that are available.” One model for private schools is for private companies to offer private online tutoring for students.

Even so, investors and private companies trying to take advantage of the market in Brazil need to weigh a number of potentially daunting hurdles, the authors say.

One is that Brazil’s market is overwhelmingly made up of relatively small, “mom and pop” private schools. Despite the makeup of those private schools, the consulting firm, L.E.K. says that it recently looked at 20 big cities in Brazil and found 100 potential companies it deemed worthy of acquisition.

A related barrier for investors looking at Brazil is that its private schools charge relatively low tuition fees, and their enrollments are small–about 250 students per school. That’s lower than some other countries, such as China, where private schools serve an average of 425 students, the report says. Brazil’s low average student enrollment, when combined with its modest tuition charges, could spook investors, the report’s authors say.

And then there’s the decentralized nature of Brazil’s education policy. For years, many of the nation’s universities used different entrance exams, and schools crafted different curricula around them. A “legacy of differentiation” pervades the market today, say the report’s authors.

Investors and private companies can get around these barriers by establishing partnerships, particularly between existing, big-name education brands and local, Brazilian-based companies, says L.E.K. And technology can help companies serve many schools at once.