The value of mergers and acquisitions across the education sector last year more than tripled, to nearly $17 billion, though the number of deals in the K-12 space dipped slightly, according to a new analysis.

Overall, the total dollar value of dealmaking in the pre-college, higher education and professional training sectors soared from just $5 billion in 2016 to $16.79 billion in 2017, the most recent year in which data was available, explained Berkery Noyes, an independent investment bank, in a report.

The flood of dealmaking in education in some ways reflects a rebound from an earlier slide. There was a 73 percent decline in the dollar value of mergers and acquisitions from 2015 to 2016.

In K-12, however, the volume of transactions dipped by 16 percent — though it remained education’s most active sector, with a slight lead over professional training services, according to Berkery Noyes, which provides advice on mergers and acquisitions and financial consulting. 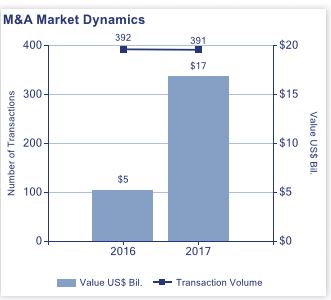 The analysis highlights a number of standout deals in the pre-college space in 2017.

In addition, School Specialty, a provider of materials for classrooms, art rooms, STEM spaces and other areas acquired Triumph Learning, an education content company and publisher. And Sylvan Learning acquired Citelighter, a provider of a browser-based tool to build writing competency.

The report by Berkery Noyes says that it sees an opportunity for companies looking to acquire smaller players to take advantage of the shift from print to digital and the creation of “new pathways in instruction and credentialing.”

Throughout all of the education sectors, a strong majority of the transactions, 71 percent, were strategic in nature—typically defined as deals made to integrate one company’s product within another, or a move made for competitive reasons.

While financial transactions—those completed by private equity firms or financial sponsors or their subsidiaries or platforms—represented less than one-third of the volume of education transactions, they accounted for more than half of the value.

Nine of the highest-value deals in education were backed by financial sponsors, said Berkery Noyes. (Financial investors typically purchase a company in the hope of eventually selling and making strong returns—after making varying degrees of changes to the organization acquired.)

“In the K-12 sector, technology investments are having an impact on state and school district expenditures,” said Berkery Noyes. “Other areas of interest include hybrid student information systems and digital content and tools, learning platforms, and data reporting and analysis.”