The intense desire of international families to send their children to college in the United States is a major factor driving demand for improved education in many foreign markets.

But enrollment in U.S. higher education institutions among those students has shown recent signs of “flattening,” a new report concludes.

Overall, the number of international students studying in the United States rose by 3.4 percent, to 1.078 million students, during the 2016-17 school year. Nearly 35,000 more students enrolled in U.S. institutions during that period on non-immigrant student visas, according to the Open Doors report, published annually by the nonprofit Institute of International Education.

It’s the 11th straight year that the Open Doors report has recorded growth in the number of international students in U.S. colleges and universities.

On Nov. 17 EdWeek Market Brief will host a webinar offering an in-depth discussion of how companies can conquer some of the biggest challenges they face in breaking into foreign school markets. Among providers’ biggest needs: finding reliable “resellers” and other partners in those markets, and knowing when to pivot and move to a different strategy in that country. Sign up here to join the conversation.

There’s an explanation for the disconnect between the overall, rising enrollment of foreign students and the drop-off in new enrollees:

Even though fewer new foreign students started this year at U.S. colleges, there was a relatively large pool of other students already taking part in degree programs and choosing to stay for additional training, said Sharon Witherell, a spokeswoman for the institute. In other words, a large number of students were already on U.S. campuses and working their way through programs–and fewer of those students left than in previous years.

And while the drop in new international students is small as a piece of the overall population, it could be signaling the start of a larger decline, Witherell said.

The IIE conducted an additional online survey of 500 U.S. higher education institutions, which found that they reported an average 7 percent decline in new students. If that is correct and the trend continues, it may not be long before U.S. institutions start to see an overall drop in the number of foreign students, she said.

Officials with the institute cited a number of “global and local economic conditions” for tamping down the number of new students coming from abroad.

One factor is a scaling down of large government scholarship programs in Saudi Arabia and Brazil. Bot of those nations have been big contributors of students coming to the United States.

Another contributor to the weak numbers of new enrollees is that more students are seeking “optional practical training” focused on their academic fields after obtaining degrees in the United States. That means those students are staying longer in the U.S. higher education system.

The country sending the most students to the United States, by far, is China, which had about 350,000 students, an increase of 7 percent over the previous year. See the chart, below: 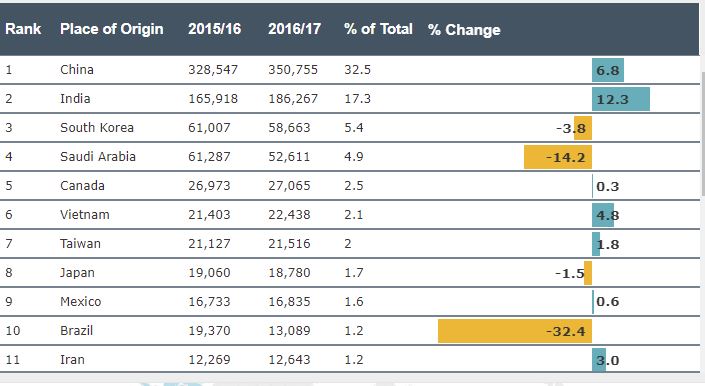 South Korea was third, home country to nearly 59,000 students studying in the U.S., though its numbers dropped by 4 percent. The enrollments for Saudi Arabia and Brazil plummeted by 14 percent and 32 percent, respectively.

The flattening in the number of foreign enrollees was also evident in the results of the separate online survey conducted by the institute and nine other education associations.

The colleges and universities responding cited an average decrease of 7 percent in the number of newly enrolled students.

On individual U.S. campuses, however, the enrollments from foreign students were all over the map. Forty-five percent of campuses said they had drops in the number of new enrollees for the fall of 2017. But 31 percent reported increases, and 24 percent reported no change, according to the report.

The intense interest among many families in Asia, Latin America, the Middle East, and other regions to send their children to college in the United States is a major factor driving demand for education in those countries. In particular, those families have sought private education, tutoring, and resources that will prepare their children for the demands of college-entrance exams and study abroad.